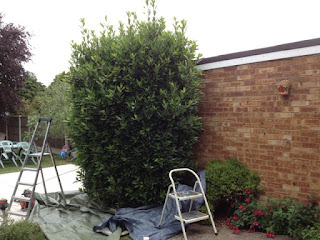 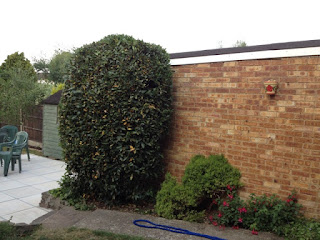 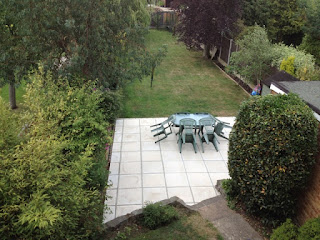 I’m nearly there - nearly where? - Almost at the end of the patio project.
Necessity has caused me to temporarily deviate from working on the final part of the patio which will be a brick edge that will separate it from the shrubbery border. It will match the visible top part of the wall on the lawn side.

My deviation of necessity today was to attend to a bay tree that was impinging on the pathway to the patio. It had grown so large that it almost completely blocked the pathway. I hadn’t cut it for a long time because blackbirds had nested in it and I’ve been occupied with building the patio.

Because of being so preoccupied I let things slip in the garden and at this time of year the growth of plants is prodigious. The lawn at far end of the back garden looked a bit like a hay field, especially in the vicinity of the pergola. In part this was due to running out of line for the grass strimmer, which meant I could not attend to trimming the grass. However, when I was at B&Q the other day I bought a packet of line for replenishing the empty spools of my Qualcast strimmer.

Now that the bay tree has been attended to and the lawns cut, the gardens look attractive once again. There are still more jobs to be done, but they are not so pressing, which means I can focus on finishing the patio.

Looking good Bill, and what makes me smile is seeing the ubiquitous green plastic chairs and table (I have a set myself) which must be taking over the world! I bet there is set near Cape Horn and another in the middle of the Gobi desert and ......

I reckon you're right there Alden, they've got my garden too...