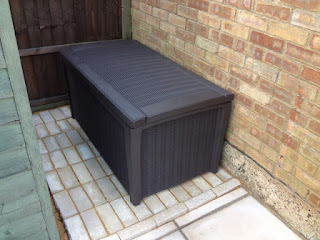 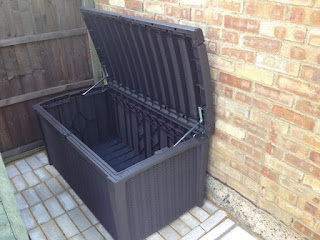 There are still a number of things that require doing before everything in the garden is in order. One job that was on the list was ticked off this morning after I assembled a Keter Borneo Storage Box that arrived yesterday, courtesy of Amazon, only one day after ordering it!

I was amazed how well the components were manufactured. All the main parts precisely slotted together to form the box, and the lid was attached with two self-assisting piston operated hinges to aid its opening and closing. Forty-five minutes after removing bits and pieces from the packaging, the box was assembled. The only tool required for doing it was a Phillips screwdriver.

I can recommend the box for watertight storage, as enthusiastic Amazon reviewers confirm that items within their Borneo Boxes have remained dry and well aired. A few reviewers say that care should be taken when opening the lid after a heavy downpour, because water can lodge in crevices on the top of the lid, and it may trickle into the box as the lid is opened.

After assembling the box I was able to do three more jobs, and there are no pressing ones to be done. The forecast for the next few days is looking good. Therefore, I’m hopeful that I’ll be able to take ‘Pike’ for a sail - most likely on Friday, when high water at Burnham-on-Crouch will be at 13.18.

Posted by William Serjeant at 9:06 pm

Oh Bill, I'll be all agog on Friday to learn how you get on with Pike. I believe that the weather is under manners at last too!