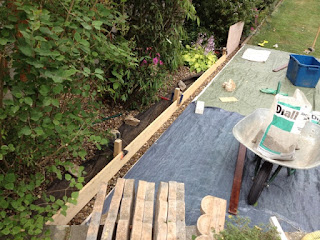 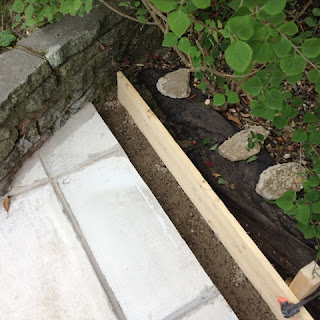 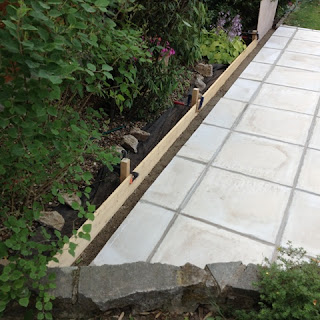 Anything built without a firm foundation is likely to fall. Architects know full well the structural importance of having a sound base upon which to build. I recollect that when I was on holiday in Cyprus a good many years ago, one thing that took my attention was the depth of trenches for the walls of new buildings. They went down to solid rock. I can only assume that in that part of Cypress at Agia Napa, the terrain is composed of rock upon which there is a deep layer of reddish soil.

Today I made the foundation for a single course of bricks that will act as a retainer where the patio adjoins the shrubbery border. In addition to preventing the escape of sand from under the otherwise exposed edge of the patio, the bricks will match others at the top of the wall adjacent to the lawn.

Parable of the Two Foundations – Luke 6:46-49 Principle verse 48: He is like a man building a house, who dug deep and laid the foundation on a rock. And when the flood rose, the stream beat vehemently against that house, and could not shake it, for it was founded on the rock.

Great links thanks -- being of Greek Cypriot descent on my mother's side and a geologist in a former life, they had some personal significance!

Agia Napa is built on a foundation of 23 million year old limestone -- the lithified remains of an ancient reef system. They need to dig deep foundations there due to the earthquake risk.

Likely your bricks will be up to the job of retaining the Great Patio of Essex, but don't forget the Great English Earthquake of 1884...

I reckon you'll be OK though.

Well, thanks Stephen for the info. I hadn't considered earthquake risk in Cyprus, and I certainly didn't think about the possibility of an earthquake in Essex!

It's reassuring that you think I'll be OK if there is another earthquake in Essex - I'm not sure about the patio.