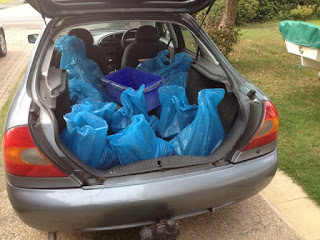 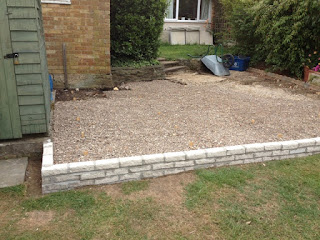 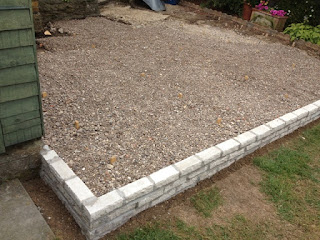 An Internet search revealed that out of seven firms who hire rubbish skips in my locality the cheapest for a 4 Yard Skip is £125 and the most expensive is £195 plus VAT!

My personal skip, in the form of my trusty car, only cost me the amount spent on petrol to visit the nearby local authority waste disposal unit. Admittedly, I had to make four return journeys, but the effort at loading the surplus earth would have been the same as if I had loaded it into a hired skip. However, offloading at the waste disposal unit required additional effort.

With the prospect of rain later in the day, my wife and I made an early start. We cleared quite a bit of earth and laid more hard core. Afterwards we covered the hard core with a layer of gravel. About one third of the area has yet to be made level and covered with hard core and gravel. When that has been done, we’ll have to put a final layer of recycled glass paving stone sand over the whole lot before laying the paving slabs.

The rain that was forecast came a little later than expected, but it was enough to cause us to stop work. However, at this stage, I feel like skipping for joy because faster progress has been made than I anticipated. I wonder if Andy Murray will be skipping with joy after his semi-final tennis match at Queen’s Club this afternoon?

Posted by William Serjeant at 5:19 pm