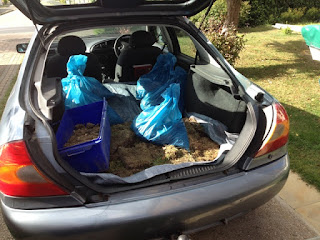 Using the car as a skip 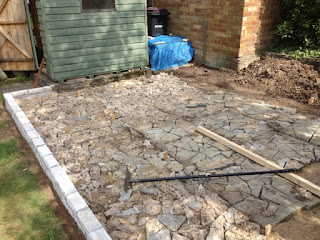 More than a third of the hard core has been laid 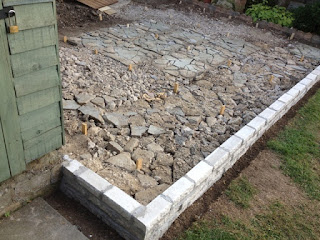 If you are motivated to achieve something you are more likely to succeed. I’ve just watched Andy Murray at Queen’s Club in the quarter-finals of the Aegon Championships. He lost the first set; then won the second and third sets. You could see that he was fired up, bouncing with energy. After winning the second set he had the psychological advantage, and he won the first game of the third set against his serving opponent Gilles Muller. From there on he held his service games to win 6-4 and the match. He is due to play in the semi-finals tomorrow, Saturday, 22nd June, against John Isner or Viktor Troicki according to who wins their quarter-finals match.

Murray is obviously motivated to do his best, not only for the prize money, but for achieving his goal of winning the tournament. If he does succeed, it will be a great boost for the forthcoming matches at Wimbledon.

I am motivated to finish building the patio in my back garden, so that I can have some time left this summer for sailing ‘Pike’. I am also motivated to get it finished before the end of July to satisfy the wish of my wife. Strangely I cannot work out how long I think the job may take. I was expecting to spend most of tomorrow working on it, but the weather forecast now indicates there will be light rain for most of the day.

Fantastic progress Bill -- Pike is great motivation, as is keeping your wife happy! I particularly admire the car skip.

Unfortunately, it looks like the weather forecast is right, at least here in the land-locked English midlands -- hopefully they've got it wrong in your neck of the woods.

Patio looks great - you use your car much as I use mine from time to time!