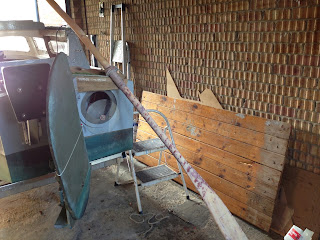 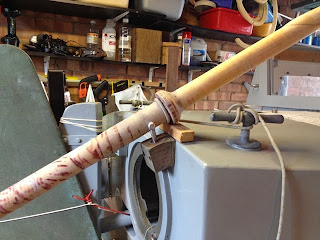 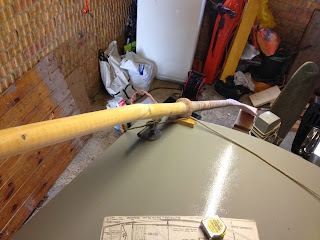 Here we are again. I was unable to spend much time on the yuloh, but I was able to determine at what point and at what angle I should drill a pivot hole into its shaft.


Originally Derek placed his yuloh in a rowlock that slid into a hole in a block of wood fitted to the starboard side of the transom. The hole in the block was 300 millimetres from the centre of the top of the transom.


My plan is to permanently fix a pivot pin into the same block, and bond it to the transom where it was before. I’m not keen on additions such as this, but I believe the yuloh will function better with the pivot pin angled away from the transom and clear of it.


All of this is theoretical, and I’m hoping it will work in practice.
Posted by William Serjeant at 8:20 pm

I'm considering a Yuloh for Puffin. I don't want any petrol on board, let alone the weight of even the lightest OB Motor. I've found a few websites and various designs but none the wiser as to the "Best" design.

I'm at long last about to make a start on PUFFIN. I've purchased a small Polytunnel greenhouse with a H/D green/white inter-woven cover. It could arrive on Friday 6th December or Monday 9th latest. As soon as I have it assembled, I will order 10 sheets of 6mm 10ft X 5ft BS1088 Marine Plywood Gaboon (Okoume) veneers throughout.

Using these large panels will mean that I can build the boat with no panel joins. The ply is actually 3100mm (10ft 2in) and the largest boat I can make from it is 9ft 8" long. Depending on the up and coming weather, I hope to have the shell built within a month or so.

Pictures on my blog when I get going.