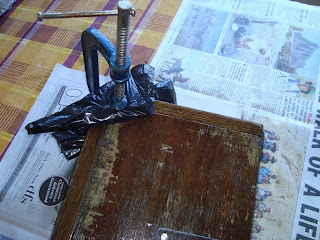 The weather has turned fine for a few days. Sunshine does wonders for me. Therefore I was inspired to get outside, set up the workbench and sand ‘Ladybird’s’ rudder in preparation for applying a coat of varnish to the stock and antifouling to the blade. 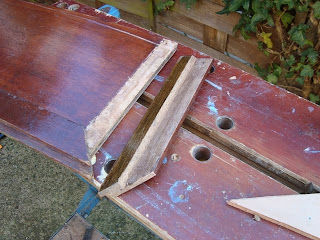 I also repaired the lower washboard where the edge piece was coming adrift from the panel. All I had to do was remove dirt and old varnish that had been trapped between the parts; apply epoxy to the cleaned and scored surfaces; then clamp and screw them together. Because the air temperature was too cold for epoxying, I did that part in the kitchen. My wife was suitably engaged in the garden, pruning roses, trimming shrubs and hedges, which meant I had the kitchen to myself – very convenient! I’m always an opportunist. My motto is doing things when you can. Don’t procrastinate.

Repairing the washboard and preparing the rudder only took a couple of hours. That’s an advantage of owning a small boat, because painting and varnishing seldom takes more than a few hours. I suppose the largest area that needs attention is below the waterline, which includes the twin keels and the rudder. The total area requiring antifouling can be no more than 17 square metres, probably less. Lightly sanding the bottom prior to antifouling will be my worst job. Unless I can have ‘Ladybird’ raised higher from the ground where she is laid-up, it will be a difficult task. I’ll endeavour to arrange this closer to the launch date. 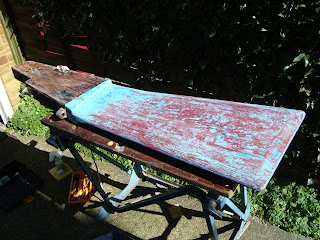 From past experience I have learnt not to strip away paint and varnish to the bare wood, because previous layers already protect the wood, providing they remain adhered to it. A light sanding is all that is required before applying one or two coats of varnish for the coming season. As long as rainwater has not seeped through the varnish to the wood, the old varnish will remain in tact, and the colouring of the wood will be unaffected. Inevitably, with a boat as old as ‘Ladybird’, woodwork will be tarnished, but as I have said, that’s perfectly OK, providing the varnish is in tact and there is no rot.

Working out of doors in the spring sunshine has been like a rehearsal for resuming the building of ‘Sharpy’, my latest project. She is a 15’ sharpie with a drop keel. My aim is to finish her in time for some sailing this year.