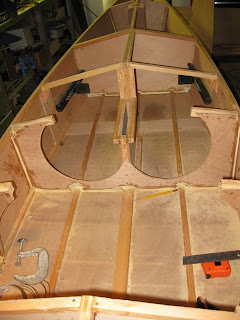 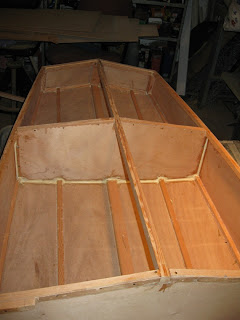 These photos give us more detail. The one of the forward section reveals that the boat has been fitted with standard foot pedals – the sort that may be found in manufactured decked canoes. Derek’s building plan gives details of an oak rudder bar angled at 30 degrees from the horizontal which articulates on a spindle embedded in a vertical fore and aft mahogany support. This support butts onto bulkhead two. The fore and aft position of the rudder bar is adjusted to suit the crew. The photo adds to our understanding of how the the keel box and the mast support are made.


The photo with a view towards the stern shows bulkheads three and four, plus details of the transom. The transom is made from two plywood panels that are joined at an angle. A substantial internal post is shaped to accept the panels which are inclined forwards to provide a streamlined effect. This arrangement, although pleasing to the eye, makes the construction more complicated than would be the case with an upright, single panel transom. The complication also requires specially made pintles that will fit the angled transom, but this requirement could be eliminated by having an external transom post with a flat outer surface.


Before the aft deck is attached, two 15 mm plastic tubes will need to be fitted to holes in the transom for conveying the steering lines between the rudder yoke and the foot pedal. The forward end of these tubes will be attached to holes in number four bulkhead. The tubes will pass through number five bulkhead. After the internal woodwork has been protected with paint, and the partitions filled with polystyrene pellets enclosed in plastic bags, the deck can be fitted.
Posted by William Serjeant at 11:25 am

Bill - This arrangement, although pleasing to the eye, makes the construction more complicated than would be the case with an upright, single panel transom.

Fernando – ( by Google Translator) - If it is pleasing to the eye is welcome. But the question is: - This mirror transom angle brings some practical advantage and palpable quality to the small sailboat? If the answer is yes, vote for, if the answer is no vote...