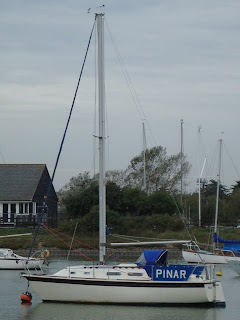 A Griffon at Hullbridge


The Westerly Owners Association’s website has photos and information about the Westerly range of yachts, including the Griffon 26, the Mk 2 and the Club. The original Griffon was the successor of the widely popular Centaur, which name was derived from a Greek mythological creature that was part human and part horse. The first known depiction of a griffon, griffin or gryphon was found in a mural painted in 1500 BC; it resembled a creature with the head and wings of an eagle and the body of a lion. Westerly named their new boat the Griffon. Although a much better boat on all accounts than the Centaur, she was never as popular as the cheaper and less sophisticated vessel.


In total, 329 Griffons were built between 1979 and 1981. Unlike the Centaur, designed by Laurent Giles, the Griffon was the brainchild of Ed Dubois. She was a faster and roomier yacht, and she was built to a higher specification, including a wooden interior. Unknown to Westerly, there was an inherent design fault with the twin keel version, which resulted in cracks appearing in the GRP at the forward end of the stubs. This was due to repetitive stress loading caused by the vessel settling into thick mud, time and again at each low water, while at her mooring. This fault was rectified, but modifications to around 20 Griffons were costly, and in part they brought about the closure of Westerly Marine Construction in 1981.