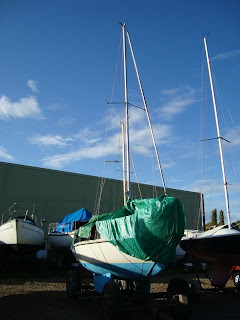 Not a very elegent winter cover, but it works. 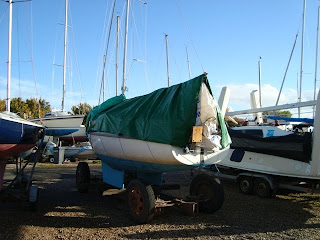 
Last Wednesday, ‘Ladybird’ was taken out of the water, and at the time I felt a certain amount of elation because she had given me a great sailing season. Technically she no longer belongs to me, because my daughter became her new owner, but I’m still very much involved with crewing and maintaining the yacht. I also have the privilege of sailing her whenever I want.


Yesterday, I helped my daughter and a friend of hers tuck the boat away under her winter covers. In the past I have usually laid-up my boats by myself, but with three people doing it, the operation was quicker and easier. We first had to remove all the clobber that had accumulated in the bilges, things like boxes of tinned food, long life milk, water cans and bosun’s items; then we took out stuff from the side lockers, such as navigation equipment, books, crockery, cutlery, followed by safety items, including buoyancy aids, and flares. Curtains were removed, along with bunk cushions, the ensign, the Autohelm, the battery and the kedge anchor. The extraction process continued until the boat was stripped bare - even her washboards were taken home for repair, and most of her ropes for cleaning. We had already taken the outboard and the rudder when the yacht came out of the water.


Unless a yacht is equipped with a bespoke winter cover and a supporting framework, tarpaulins spread over the boat are the next best thing. Quite often the mast is secured above the yacht to form a ridge for the tarpaulins. Some sort of chafing material is tied to the tops of the stanchions to minimize wear and tear when the tarpaulins are buffeted by the wind and heavy rain or when they are subjected to the weight of snow. I usually keep the mast up, but remove the backstays so that a cover can be placed over the boom which I fit with an extension of wood. I tie the topping lift to the end of the extension; then I keep it in place with a rope tied to the backstay fittings. I fix a wooden support between the pulpit and the mast for a second tarpaulin to protect the foredeck. This arrangement is not elegant, but it does the job.


During the winter there will be the usual maintenance: perhaps replacing worn stitching on the sails, repairing bunk cushions, making new curtains, strengthening the washboards and charging the battery. The outboard will need servicing.
Posted by William Serjeant at 8:04 pm