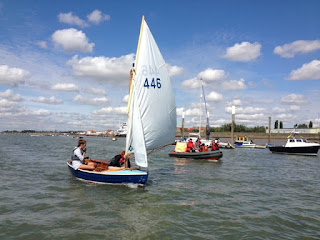 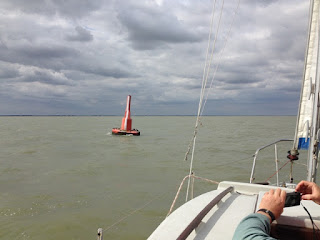 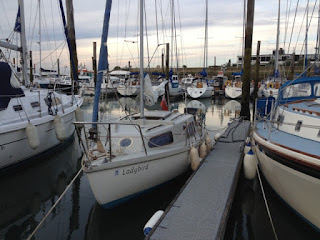 It was with a little trepidation that I stepped onto the platform at Burnham-on-Crouch railway station where I was to be greeted by the owner of yacht Ladybird. My trepidation was not to do with meeting him, but with facing the fact that I was going to start a short cruise involving more than would be required of a day sail with Pike, my Iain Oughtred skiff. We would be leaving the River Crouch for a sail through the Ray Sand Channel, which would mean crossing the narrow isthmus of sand between Ray Sand and Buxey Sand. The return trip would be via the Swin Spitway at the eastern extremity of the Buxey Sand.

The Met Office Inshore Shipping Forecast for Gibraltar Point to North Foreland was: ‘SW 3, occasional rain, fair later.’ In fact, the rain came later that night when we were snugly berthed at Bradwell Marina. It continued into the early morning of Thursday, 20thAugust.

High Water for Burnham on Wednesday 19th was not until 15.49, which gave us ample time for getting to the yellow marker buoy from where we would sail northwards across the shallows for the Ray Sand Channel. At midday we cast off from Ladybird’s mooring at Rice and Cole and we powered clear of neighbouring boats before making sail.

We anticipated that our crossing of the sand at the shallowest point would take place about an hour before HW Burnham. There were surprisingly few boats on the move, apart from a number of Burnham scows being sailed by youngsters. The Foulness Firing Range launch was anchored off Foulness Point and red flags were displayed on the south bank indicating that firing was taking place. We already new that because periodically, there were emissions of black smoke followed by the sounds of explosions. Rather than firing rounds, it appeared that the burning off of outdated explosives was taking place.

A SW wind of force two gently wafted us over the incoming tide to give us two to two-and-a-half knots, bringing us to the all important yellow marker buoy. We arrived there a little later than planned, but that gave us the advantage of deeper water for crossing the hidden isthmus under Ladybird’s keels. We had an updated, detail chart showing two safe water buoys with vertical red and white stripes. Sure enough they were picked out by the skipper and confirmed to be so by further inspection through binoculars. They gave us reassurance that we were where we should have been. By then the wind was on ‘Ladybird’s’ port quarter and it increased in strength, possibly to a force three, giving us a good speed of over four knots. Far ahead to port there was the unmistakeable outline of Bradwell Power Station, which was very close to our planned destination at the marina.

Our course was parallel to the eastern fringes of the low-lying Dengie Peninsular. Ladybird’s track matched the zero metre line on the chart, but with the depth sounder showing four metres, giving us three metres to spare.

At the northern end of the Peninsula, beyond Tillingham Marshes, there’s the ancient landmark of St Peter’s Chapel. This historic building is a useful feature for taking compass bearings, and we used it for confirming our position in relation to Bachelor’s Spit, over which we passed with only a metre to spare - and that on a falling tide!

To avoid the ebb from the Blackwater we sailed as close as we dare to Sales Point at the entrance of the river, but beyond that, and hard on the wind, the current forced us further and further into deeper and faster flowing water. Had we not resorted to motor sailing we would have been forced to anchor until the tide or wind changed.

With only a mile to go, we furled the Genoa, started the engine and chugged into the wind, so as to arrive at Bradwell Marina in time for an evening meal. We walked a short distance to the Green Man pub where the skipper treated me to a deliciously tasty meal of fresh haddock and chips.

As is customary for me on the first night of a cruise, I did not sleep well. I fitfully slumbered, periodically waking to listen to the pitter-patter of rain and to speculate about the next day.

Posted by William Serjeant at 12:41 pm

Always good to vicariously follow in your footsteps on Google Earth -- very much looking forward to Part 3!

Hello Bill, it is very good to know that the south westerly helped you and your friend out. As I already told you elsewhere, it was no good for yours truly!