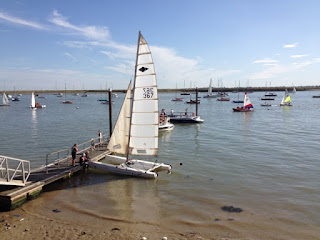 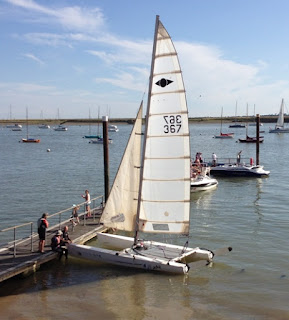 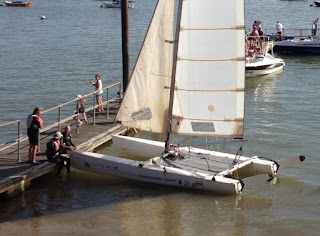 This year’s Hurricane 5.9 Nationals were held at Thorpe Bay Yacht Club between 15th and 18th August. I took the above photo on 9th August. It features a Hurricane 5.9 catamaran at Burnham Sailing Club’s pontoon. This class of racing catamaran was designed and built by Reg White and his brother Robert, both of whom were Olympic sailors based at Brightlingsea Sailing Club. Reg helmed a Tornado Class catamaran at the 1976 Summer Olympics in Montreal. With his brother-in-law John Osborne as crew, he won four of six races to secure a gold medal for Great Britain. Tragically, he died of a heart attack after an evening race with his grandson on 27th May, 2010.

The Hurricane 5.9 is similar to the Tornado, but less beamy at 8ft to comply with width restrictions for trailering in the UK. She has very tough, rigid hulls constructed from foam sandwich/carbon. The latest SX version has a pre-bent metal mast and a Pentex Square-Top mainsail. With dual trapezes she can be managed by crews weighing between 18 and 30 stones. (Combined weight)

These racing cats are admirably suited to places with shallow water, because they are equipped with kick-up centreboards and kick-up rudders. There is a fleet of five 5.9 SX catamarans at the Marconi Sailing Club which is situated on the south bank of the River Blackwater. I was a member in 2007 and 2008 and I recollect seeing many catamarans at the boat park.

Apparently, a broad, all age spectrum of sailors, male and female race them, and there is a friendly, family orientated Hurricane 5.9 Class Association.*

It is surprising what one can glean from a photo. Of interest to me is the little motive ‘Zhik’ on the side of this particular Hurricane 5.9. Zhik manufacture and market high performance sailing wear, of which a useful item for me would be their ‘Deckbeater’ shorts that have pads for protecting one’s posterior when hiking a boat. If you read my article, ‘Had an Excellent Sail with ‘Pike’ – Part 2’, you will know why!  (To see it, click the very last Link)

Catamaran Sailor – Reporting on the Hurricane 5.9 in March 2010
http://www.catsailor.com/forums/ubbthreads.php?ubb=showflat&Number=206012


Posted by William Serjeant at 9:13 pm