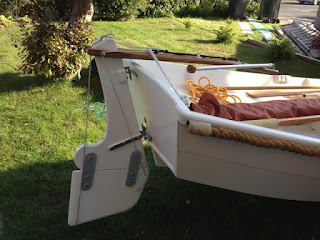 A tiller extension is not required - Note the rope horse. 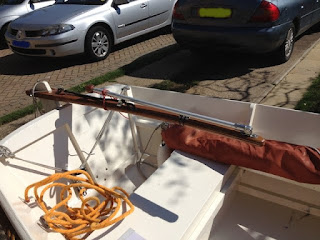 Tiller extension in stowed position - Note the lashing to secure it. Ugh! 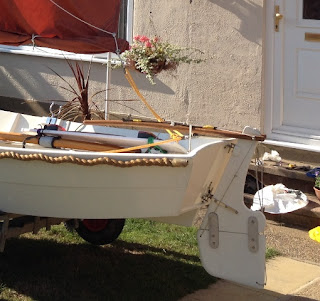 The tiller is far better without an extension. I'll be changing the sheeting arrangement.*

Quite a few changes to the original Iain Oughtred design were made to Pike by previous owners. The rudder was modified by having a fairly unique system for raising the lower half. This entailed having an up-haul and a downhaul, both of them running along the upper surface of the tiller. Each had independent hooks for retaining them when under tension. Above them there was a tiller extension. These additions did not feature in the original design.

When I sailed the skiff for the very first time I found that there was no need for an extension, because the tiller could be reached when I was sitting on the side benches and on the thwart. Furthermore, the sheet sometimes became trapped under the end of the extension.

Another added item not featured in the original design was a rope horse for a sheet block. When there was no tension on the block it often came into contact with the tiller and the extension. Instead of a rope horse there should be a continuous* sheet running from the clew of the sail through single blocks either side of the transom. The sheet should be long enough for the sail to be brailed to the mast.

I am currently making these changes. There are a few more things I would like to attend to before my next sail.