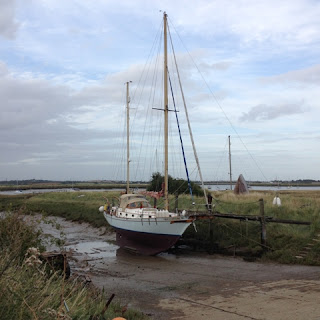 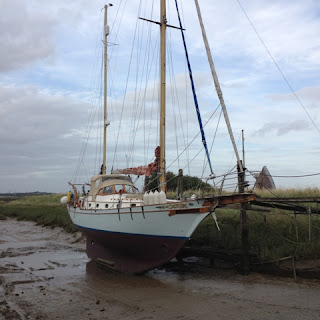 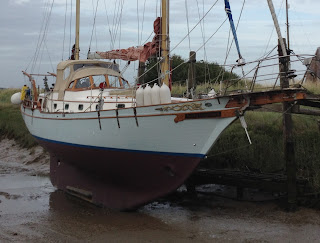 I am amazed at the amount of information that can be found on the Internet about certain boats. I saw this centre cockpit Transworld 41 at Hullbridge. She was on a slipway at the eastern end of Brandy Hole Reach on the River Crouch. By keying her name, Lady Rosemary, into Internet search engines I was able to find out quite a lot about her. She was designed by William Garden and she was built by the Transworld Boat Building Company in Taiwan, in 1978. She is a British Registered vessel of 17.26 tons.

From Ancasta’s brokerage website* I discovered that the first owner had taken her on a world cruise. Her very comprehensive inventory at the time of sale included a Hydrovane self-steering unit and she was equipped with Seldon in-mast furling systems for both the main and mizzen. (This doesn't appear to be the case at the moment - see photos.) She was set up for single-handing, which for a globetrotter is a good thing, because crews are not always easy to find. On the other hand, she has seven berths distributed between three cabins. A bit of chartering wouldn’t be out of place.

She is a bigger and far more complicated yacht than I would want to own, on account of numerous bits of equipment that could go wrong and the expense of running her, but she has already proven herself to be a practical live-aboard yacht with a few home comforts such as: a hot and cold pressurized water system, and heating in the form of an Eberspacher cabin unit.

While looking for information about the boat, I could not avoid coming across details of the couple who currently live aboard Lady Rosemary.  They are Jack and Anita Curtis. Anita set up a Blogspot blog** in 2008 telling of their life afloat. She makes and sells handmade jewellry, and she has a website illustrating her wares. Here’s the address: http://www.anitacurtis.co.uk/  .

I just found your story about the TransWorld 41, nice job...I own LO-KEE