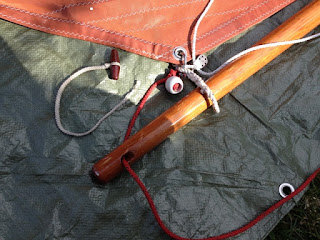 I replaced the throat toggle with a strong loop of rope 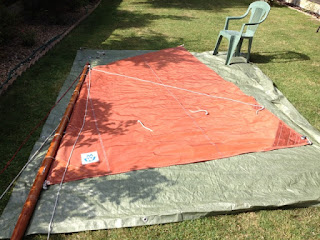 The full sail laid out 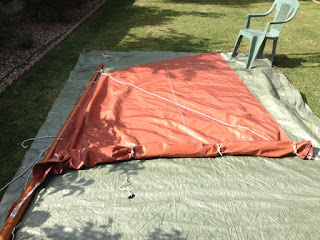 ‘Pike’ has a single spritsail. Iain Oughtred originally designed her without a boom, but one of her owners thought better, and added one. This complicated the reefing process, because a block that was attached to the mast for the boom snotter prevented two of the luff toggles from sliding down the mast. To reef the sail I had to lower the throat of the sail from the full sail position to a point below it equal to the depth of the reef; while doing so I had to release the luff toggles and replace them when the sail had been lowered. To make matters worse, there were two fairleads screwed to the mast. Now that I have removed them and the boom snotter block, the sail can rapidly be lowered to the reefing position for tying in the reef points. The sprit snotter can then be adjusted to put a fair strain on the sail so that it sets properly, and away you go!

Having removed the boom and its associated snotter block, the rig has been restored to the original design. I’m a lot happier with it, because I can quickly put in a reef when required.

Posted by William Serjeant at 8:41 pm

It looks very much like you have that one cracked, Bill. I feel that the yard should at least give some boom effect?

She went well without a boom. I was pleased with the way she pointed, having at most, 10 degrees of leeway. Running is best done with a slight angle to the wind; therefore a boom makes little difference to speed.

Hi Bill, have never been clear about reeling a sprit. Looks like you roll the bottom of the sail up to the reef point, throat stays in same place. Does main sheet still fasten to same clew or is there a reef clew you move it to? Down haul still in same place or transferred to higher luff clew?
Looks like your heading towards the perfect shallow draft, handy little dinghy. Years of fun and whizzing around the marshes, always a favourite of mine.
Brian