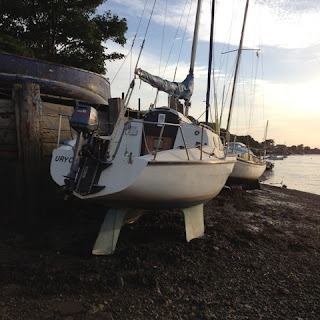 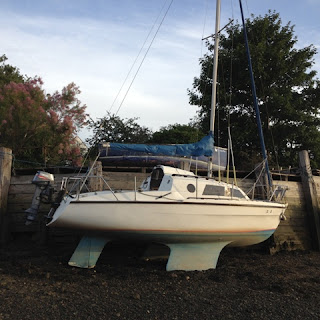 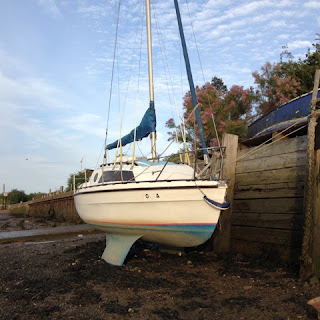 The Sunray 21 masthead sloop was designed by Arthur Howard, who also designed the Leisure 17 and the Sunspot 15. The family resemblance of all three yachts is evident by their appearance. She was an early GRP yacht with encapsulated bilge keels. I believe the first one was built by Cobramold in 1971. This particular boat has been based at Hullbridge for a number of years; therefore I’m not surprised that she has had her keels shod, since twice a day she has had to settle on a mixture of gravel and mud, the sort shown in the photos.

Her accommodation would include a dinette double berth in the saloon on the port side and a double ‘v’ berth in her forward cabin. The galley would be on the starboard side, opposite the dinette; astern of that and adjacent to the companionway, there would be a compartment for a Porta-Potti. She would have standing headroom under the companionway hatch, and her spacious, self-draining cockpit would have three storage lockers: two under seats on the port side and one on starboard side.

Posted by William Serjeant at 10:17 pm

Hello Bill, is the boat in your photo just upstream of the slipway at Hullbridge?

Unknown said...
This comment has been removed by the author.
3:55 am