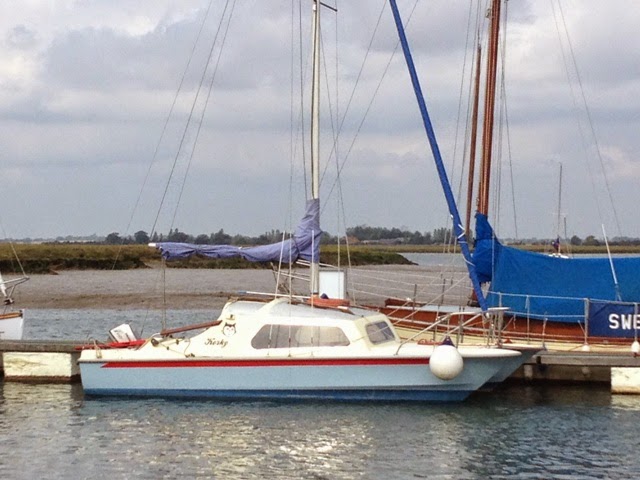 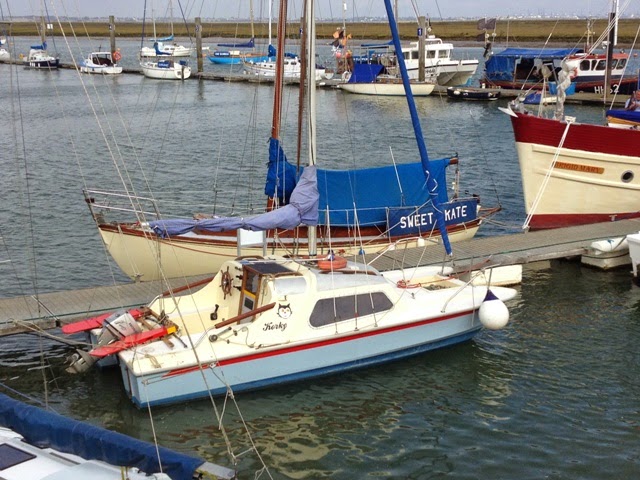 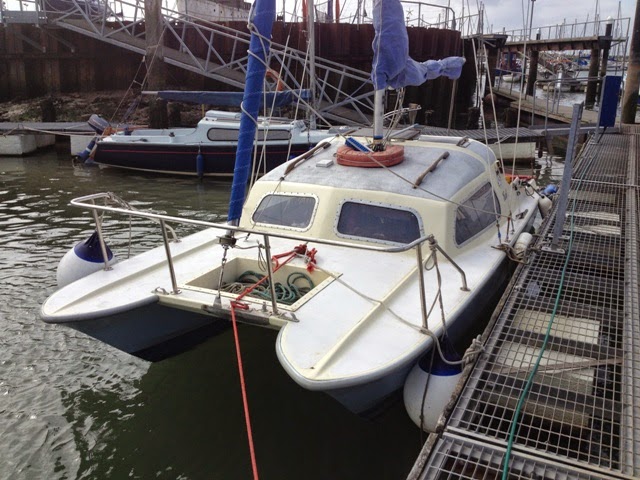 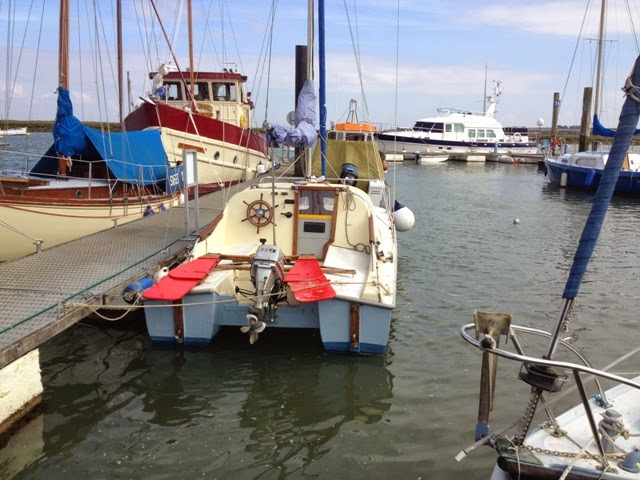 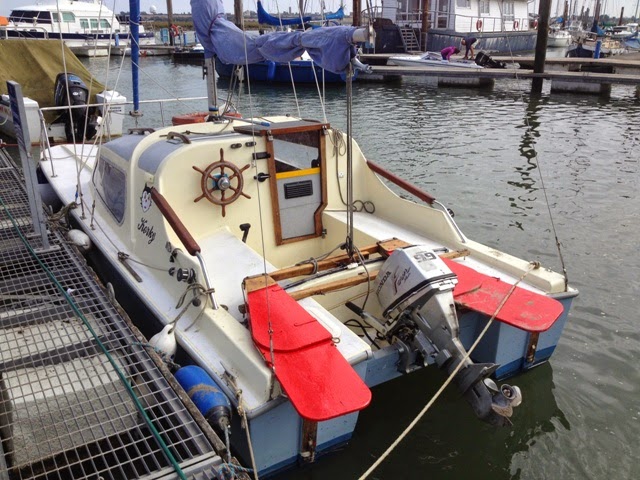 You don’t find many of these Cracksman Catamarans about these days. Originally designed by William (Mike) Henderson, they were built by Newbridge Boats in the early 1960s. The boat featured here is a Mark 11 with a masthead furling Genoa. The Mark 1 had a smaller cabin and a fractional rig with hanked foresails.


‘Korky’ is well rigged with two backstays, six shrouds, three to port and three to starboard, and a forestay. From the point of view of ‘safety’ she has a generous pulpit, handrails on the cabin top and wooden-clad stainless steel handholds or back supports above the coamings. The self-draining anchor well, which is let into the foredeck, is a handy feature. She has a powerful Honda 9.9 outboard with a Morse type control fitted to the port side of the cockpit. Her removable twin rudders are linked to a wheel steering system.


She is in remarkably good nick for her age, and her owner obviously appreciates her by maintaining her.


Images of Korky the Cat

Hello Bill, that is indeed a very good example of a Cracksman. I remember when they first hit the market. There's one currently for sale on e-bay, but she's in need of a lot of restoration.

Beauty is clearly in the eye of the beholder... :o)

Bill, I bought the 1979 for which you show the eBay US ad, dragged it across the colonies to its new home near Lake Mead, Nevada. Project boat, hence my question: Did you by any chance snap any interior pictures? My plans revolve around enlarging the cabin area to allow more accomodations, so I'm interested in any interior shots I can get a hold of. Thanks for posting the photos.

I think you will have a lot of fun. The boat was not mine; therefore I was unable to gain access for photographing the interior.

Hi there, I have just bought a Cracksman 20 Mk1 (fractional rig)...but the sails on it are wrong (from a Firefly so way too small)....does anyone know where I might find the correct sail dimensions for it? have been searching the web but so far no luck...

Mine carries the mast and sail from a Hobie 17 or 18, haven't pinned down which yet. Appears to be plenty big enough, haven't yet had the opportunity to confirm that. I have some brochure materials on the boat at home, I'll check tonight and see if sail dimensions are included. Once I go to a biplane sail configuration, I'll give you mine. Where are you located?

You will need a total sail area of about 200 Sq ft. See the link to Sailboatdata.com for more information.

Thanks Bill....any clues on Luff and foot lengths for the mainsail? (I can't take mas and boom measurement's until I am next down on the coast in a few week's time)

Hi Ken, sorry only just saw your post. Any info gratefully received; I am in the UK, and the boat is moored in South Devon in Salcombe harbour

Have you joined the Yahoo Cracksman group? Not real active anymore, but there's quite a bit of info on the site. I just looked, didn't see any measurements for luff and footer lengths. Since mine came with the Hobie 18 sail and mast I didn't go after the original measurements, just knew the Hobie had worked well for the prior owner.

Try Yahoo site, some owners with original sail,may be able to answer you.

Wind at your back, and all that stuff,

Hi Ken, yes I did and amazingly was contacted by a very kind guy from North Devon who has converted his Mk1 to motor only and is going to give me an entire original rig and sail set.

The kindness of some people truly knows no bounds!

Wow, score one for Matt! Love to hear your reports, maybe you'll inspire me to get off my duff.

I will post some pics when we get the 'new' rig and sails up, hopefully this weekend.

If you are on Twitter/Facebook etc please follow/like etc!

Just thought you might like to know we have continued restoring our Mk1 Cracksman 20 which seems to be adored by all who know her in Salcombe Harbour ("Look, it's HippyChick!" is the cry we hear so often when heading out of harbour for a sail)

We have authentic Cracksman 20 sails now, after a bit of hunting and think next we need to have new rudders made (after one collapsed on us doing about ten knots off the South Devon coast!)

We even managed to get the original nav lights going, despite the last owner having for no apparent reason, butchered the electrics!

More pics and stuff on www.hippychickboat.co.uk

Thanks for the update. You are obviously enjoying ownership, maintenance, sailing etc. It is heartening to hear that a 'classic', and now quite rare catamaran is being preserved and used.

I'm doing up a Mk2 at the moment in the Solent, purchased a gutted one, so making a few unnecessary interior changes etc :)

Great. I hope you will be able to get her back on the water and have a lot of fun with her.

Hi Lyndon. We've just purchased a 1980 Mk2 cracksman. Has also had the interior stripped out. Would be good to connect & share ideas. Ours is in Perth.