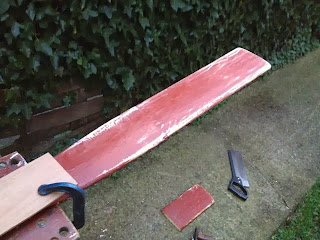 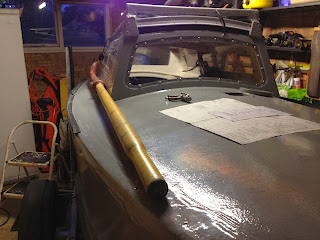 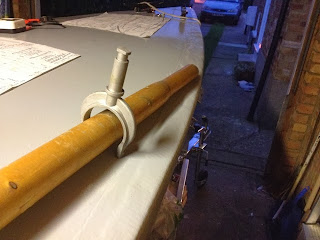 On measuring ‘Minnow’s’ yuloh I discovered it was about a foot too long, and the extra length was in the blade. Not only was the blade too long, but it was too wide by 55 millimetres. The less width a blade has, the faster must be the action for thrusting a boat forward at a required speed.


If my memory serves me correctly, some people who made standard Paradox yulohs discovered they worked better if the pivot cup was moved up the shaft by about 70 millimetres. A better balance was obtained, and the yuloh sat more happily on the pivot pin. In light of this, I shall place the pivot cup on my yuloh 70 millimetres higher up the shaft than shown on the plan.


The yuloh I have inherited has a straight shaft, whereas the plan shows a curved one. The blade itself has been set at an angle to the shaft - rather more than depicted on the plan. In view of this, I think I shall cut and remove a thin wedge from the shaft, and rejoin the parts by epoxying them together.


I am giving thought as to how to make a stowage rail for the yuloh on the starboard side deck. The plan shows a ¼ inch brass pipe in the form of a loop. There is also a semicircular strap from the same pipe bolted to the foredeck for securing the end of the yuloh’s shaft. I may modify a rowlock for securing the shaft to the deck.
Posted by William Serjeant at 9:09 pm