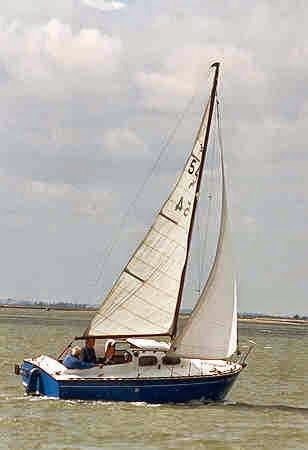 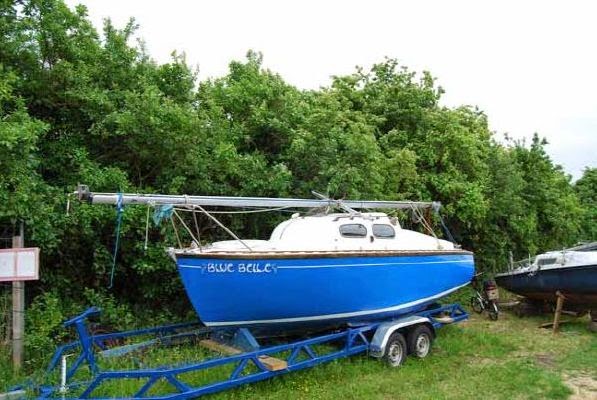 I once owned a Fairey Fulmar, and I kept her on a mooring at Hullbridge. She remained afloat at all times, which was a bit unusual for that part of the River Crouch. There were two reasons for being able to remain afloat: her shallow draught when her keel was raised, and because the mooring was located in an ever present pool at low water.

Laying the mooring was a bit of hoot, because my meticulous plan didn’t quite work out as I hoped. The story goes as follows:

I had a child’s wooden wheelbarrow that I filled with concrete into which I inserted a loop of iron rod before it set - So far so good. The result was a nice mooring block conveniently placed in the wheelbarrow for transporting it to where I may want.

At low water I went to the spot of the proposed mooring, and I tried digging a hole in the mud which was about two feet under the surface of the water, but it proved to be very difficult. Eventually I was satisfied the hole was big enough, and at each of the four corners I inserted long canes as markers. Before the tide came, in I wheeled the barrow and its contents to the middle of the river, adjacent to the Up River Yacht Club’s slipway and buoyed it.

As planned, I found myself standing on the bow of my Fairey Fulmar an hour before high water hauling the rope which was tied to the mooring block. Because of the combined weight of me and the block, the prop almost came out of the water! To make matters worse, I could not at first remove the block from the wheelbarrow, because it was buoyant. To reduce the weight at the bow I kept the block submerged. Meanwhile the yacht was drifting out of control. By forcefully prodding the barrow with the boathook I was able to free it. I returned to the cockpit to gain control and to bring the yacht back to her designed waterline for the prop to have enough drive for making headway.

Approaching the wiggling canes, and about fifty yards away from them, I set an anchor from the stern so as to position the bow by the markers. By the time this was accomplished it was almost high water at the stand of tide with just enough current to keep the yacht by the markers. I cut the engine and went forward. Apprehensively I lowered the block between the four canes. A later inspection showed that the hole was not quite large enough for the block, but there was still enough depth at low water to keep my Fairey Fulmar clear.

She turned out to be a fine yacht for East Coast cruising, on account of her lifting keel, but care had to be taken when traversing swatchways because of her 5’ 9” draught when the keel was fully down. Winding it up and down took ages.  At 20’ LOA and with a beam of 7’ 9” and headroom of 5’ 5” she was a comfortable two berth cruiser. Despite her top-hamper, her performance to windward was exceptionally good. Her one big drawback was her inability to hold a course. Having to always steer by hand was a nightmare. The inboard engine situated under the cockpit floor was easy to get at.

Unfortunately, I didn’t take any photos of her, and I can’t even remember her name. This is a shame, because I have not been able to include her in ‘Photos of Boats I Have Owned’: http://bills-log.blogspot.co.uk/2013/04/photos-of-boats-i-have-owned-part-1.html

Your escapade when placing a mooring reminds me of some of the interesting yachting situations I have found myself in over the years LOL! - I think it's called 'experience' and if we didn't have them we would never learn anything.

How are these mud moorings controlled on the East Coast? do you have to have permission? Is an annual fee paid?

And thank you for adding the link to the Silhouette. I went to the owners association site and looked a 'meet' in the Solent - there are some very, very nice restored boats and some obviously proud owners - what a great little boat.

I remember when I was growing up in Christchurch, South Island NZ and sailing on the estuary there that someone was marketing a range of Robert Tucker yachts - The 'Caprice', the 'Silhouette' and the smallest the 'Midshipman', which wasn't much more than a big dinghy with a cuddy cabin.

Haha Bill, that had me chuckling. As Alden said, without these 'experiences', we'd learn nothing, and life would be colourless, and monotonous in the extreme. Theres a Fulmar over at Andy Seedhouses yard in Woodbridge. She has been sold, but her new owner is keeping her there for the time of being while he improves her, slowly. Its a shame grp came on the scene when it did, that hot moulded agba is winning combination. For all that one in Woodbridge looks beaten by time and circumstances, shes absolutely unbowed, and, given some tlc, she will be good for a few more decades yet.

These days moorings are very much controlled. Harbour Authorities have the last word, but often yachting and boating clubs have delegated responsibilty to manage moorings on their patches. Boatyards and marinas sort out their moorings. Harbour fees are payable for moorings.

I always take an interest in any of the Fairey Marine boats. The fellow who bought my Fulmar, sold her and bought the bigger Atalanta. I crewed aboard her on several occasions.

Thanks Bill. My reason for asking is that my daughter and son in law (a Brit) are returning to the UK later this year. It suddenly dawned on me (when I saw the relatively cheap cost of some small fiberglass yachts - A GRP Caprice for under 500 pounds!) that it may well be possible for this Grandad to visit every year, have a small yacht on a mud mooring and undertake a lifelong ambition to explore all that Swallows and Amazons area so much written about by Charles Stock, Maurice Griffiths and others.

As a ball park figure what would an annual mooring fee for a small mooring cost? Do you think a local club would look favourably at an upstart colonial paying a membership fee to facilitate such a plan?

Would a small yacht be able to lie in a mud mooring in winter or is it absolutely imperative that they are hauled out?

I would be interested in your wisdom in all of this. Of course it would be sensible in some ways to just charter a small yacht for the time of my visit but the costs are substantial.

I was looking through the book "Laurent Giles and his Yacht Designs" because for some reason the Fairey Fulmar reminded me of one of Giles' small boats - and I found it in the book - It's the 'Audacity Class' a little 21 footer with 1' 7" draft with the centerboard up - quite a nice little boat - I have yet to do a Google search, but was thinking maybe this is a boat that you might like to add to your very useful list of little yachts.

Alden,
Moorings
The last time I paid for a mooring was when I owned ‘Ladybird’, a 19’ Seawych. To keep her at Rice and Cole, Burnham-on-Crouch, including winter lay-up ashore, was in the region of £1,200 – that was 4 years ago!
If you know someone who knows someone, it may be possible to find a drying mud mooring up a creek for as little as £200 a year.
Join a club for around £400 and pay an annual subscription fee, plus lay and maintain your own mooring, in the long run, could be relatively cheap. Most clubs like members who are able to help out by voluntarily giving of their time and expertise.
A yacht always needs watching to make sure her mooring holds. My neighbour kept his boat on a drying mooring at Thorpe Bay, and this winter she was driven ashore in a gale and was holed. The insurers wrote her off.
Fibreglass Boats
Fibreglass boats are best taken out of the water for two or three months to let them dry. A winter afloat without protective covers can cause havoc to woodwork and running rigging.
Solution
Maybe your daughter and son-in-law could look after your boat in your absence.
Cheers,
Bill.

Thank you very much Bill, that advice and information is invaluable. I built my own 30 footer many years ago and are still actively sailing and maintaining her so I know a thing or two about these things but there is absolutely nothing like a bit of local knowledge which you have kindly shared. Thank you.

My initial thoughts regarding this scheme was to have my daughter and son in law look after and use any small boat that I might purchase, in fact they would be the UK owners.

I take your point about winter storage and weather - I know that from time to time hurricane force winds can create a lot of havoc along coastal areas.

I am sure that somewhere there is a tiny creek where I might park a very small boat without disturbing or impinging on anyone.