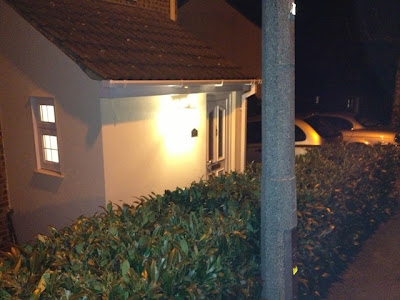 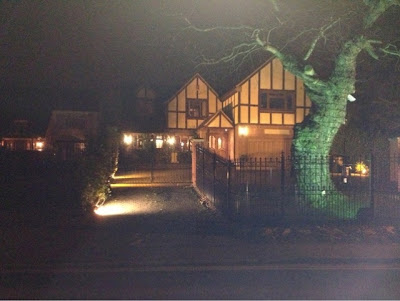 I normally take my daily walk during the hours of daylight, but today there were visitors at the house; therefore I postponed my walk until after they had gone. By that time it was dark. About halfway through, with another mile-and-a-half to go, I became aware of porch lights being activated by my movement. Then I became conscious that there were many houses with exterior lights permanently on. Perhaps they were illuminating pathways or steps for safety reasons; maybe they were there to give peace of mind by eliminating dark shadows. It was obvious that some were to show off property. They were trained on buildings to reveal architectural features, such as pseudo Tudor boarding, decorative brickwork, exterior rendering and wrought ironwork.
In all, within a mile-and-a-half, I counted more than a hundred and fifty lights permanently on. I suppose the amount of electricity consumed by them in comparison to street lights was but a tiny fraction. Nevertheless they added to the whole light emission from Planet Earth. When seen from outer space, the shape of continents can be deciphered by the glow of lights, all of them adding to global warming and light pollution.
Somehow we are not getting the picture. We do not care. We are not bothered about the future. We won’t be around to suffer the consequences, but we cannot deny that the activity of humans has changed the face of our planet more than any animal species. That is not a premise; it is a fact. Those changes are particularly evident when measured in terms of destruction to the world’s forests and jungles. They are also seen in the expanse of habitations, cities, towns and villages that cover large areas of land. Pollution and heat emission caused by industrial activity has reached an all time high, and there is abundant evidence of man’s adverse affect upon marine animals.
On Wednesday, 9th January, Prince Charles, speaking at a European Union conference on global warming, warned of the consequences of not tackling the problem by reducing emissions. We can turn a blind eye and not care about generations to come, or we can each do our part. Those parts need not be great, because many small parts can make a great difference.
Do we really need to keep our porch light on?
All Links relate to Prince Charles, and they are in chronological order, the most recent first.
Prince of Wales: climate change sceptics 'playing a reckless game of roulette' (13th January, 2013)
http://www.telegraph.co.uk/news/uknews/prince-charles/8314052/Prince-of-Wales-climate-change-sceptics-playing-a-reckless-game-of-roulette.html
PRINCE CHARLES ON CLIMATE CHANGE: GLOBAL WARMING SCEPTICS ARE ALL LIARS (4th February, 2010)
http://www.telegraph.co.uk/earth/environment/climatechange/4980347/Global-warming-has-reached-a-defining-moment-Prince-Charles-warns.html
The Green Hypocrites: Prince Charles and Gordon Brown take separate jets... to lecture the world on global warming (16th December, 2009)
http://www.dailymail.co.uk/news/article-1236249/The-Green-Hypocrites-Prince-Charles-Gordon-Brown-separate-jets--lecture-world-global-warming.html
Global warming has reached a 'defining moment,' Prince Charles warns (12th March, 2009)
http://www.express.co.uk/posts/view/156294
Prince's plea over climate change (27th October, 2005)
http://news.bbc.co.uk/1/hi/uk/4380658.stm

Posted by William Serjeant at 9:59 pm

Again, Bill, you write a very good blog! I agree completely!
In Siberia they measured temperatures about MINUS 50, in Australia PLUS 50 degrees Celsius. That difference has never been there before! You can boil water with that temperature difference ;-)
By now governments start to believe about global warming, but meanwhile so many people keep on driving their cars, wasting energy, pollute nature...

I am now a follower of your blog, and thank you for it.

I write and maintain a blog which I have entitled “Accordingtothebook” and I’d like to invite you to follow it. I’m your newest follower.

This is a great blog! I do appreciate it. Meanwhile, we can design custom lights or custom exterior lighting to suit your space. custom lights boston