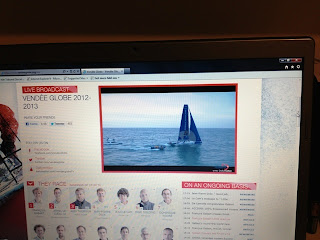 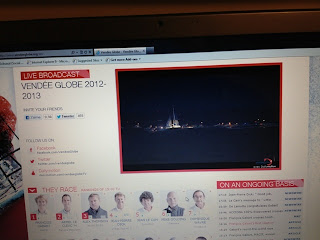 ‘Banque Populaire’ crossing the finish line
Well, Francois Gabart skippering ‘Macif’ made it home to Sables d'Olonne in a record time of 78 days, 16 minutes, and 14 seconds, followed by Armel Le Cléac’h, racing ‘Banque Populaire’ only 3 hours, 17 minutes and 53 seconds behind. That’s incredible after match racing over a distance of 27,000 nautical miles.
These valiant, accomplished sailors and their yachts were shown live on the Vendée Globe website through the medium of video film as they crossed the finish line. Everything was meticulously stage-managed with typical French panache.  Credit must go to the organisers who are well-practised at running this global event for solo sailors, their sponsors, supporters and the general public, thousands of whom have been following the race.
The race is not over until the last of the remaining competitors cross the finish line. Third place will most likely go to Alex Thomson, the Englishman racing ‘Hugo Boss’, and if the other Brit, Mike Golding skippering ‘Gamesa’, continues to maintain his current position he will be sixth.  These and other participants approaching Cabo Finisterre and the Bay of Biscay are experiencing winds of 30 or more knots. They will be tested to the limit as they pass through shipping lanes and manoeuvre around fishing craft and their nets, especially in hours of darkness.
I am not into racing, but I have been fired up following this marathon that has seen many retirements through gear failures, particularly with hydro-generators, Alex Thomson having to repair support mechanisms for both of his; they in turn damaged the steering rods' connecting rudders. Jean Pierre Dick’s ‘Virbac Paprec’ lost her keel, and he is skilfully sailing her towards the Portuguese coast which is about 800 nautical miles away.
It’s not a race for the fainthearted, and hard earned experience is not a recipe for success. Mike Golding on his fourth Vendée Globe was my hero at the beginning of the race, and he remains mine now, but I feel sure his age has been a handicap, and lack of electrical power and electronic failures aboard ‘Gamesa’ have made their mark. Alex Thomson was my second favourite, and he has done brilliantly by overcoming many obstacles and racing a boat that was known to be demonstrably slower than the Gabart’s ‘Macif’ and Armel Le Cléac’h’s ‘Banque Populaire’. I felt sorry for my third favourite, Samantha Davies, racing ‘Saveol’, when a rigging failure brought her race to an end.
Link
Vendée Globe
http://www.vendeeglobe.org/en/

Posted by William Serjeant at 9:47 pm