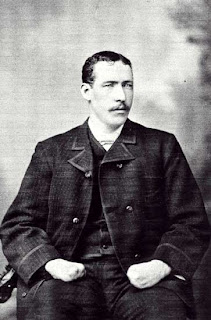 Blackburn after the loss of his fingers 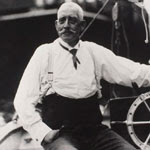 Blackburn at the wheel of an unknown vessel 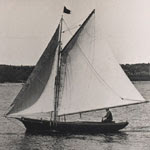 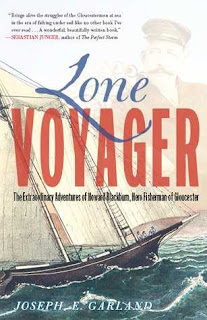 
Anyone who knows anything about solo crossings of the Atlantic by famous sailors has heard of Howard Blackburn. Just enter his name in the Google search engine and hundreds of links appear, but there is surprisingly little about the boats he sailed. Nearly every article tells of his survival in a banks dory after not being able to return to his mother ship, the ‘Grace L. Fears’, while fishing on the Grand Banks for halibut. That was a tale of great suffering, so great a hardship that Blackburn lost his fingers and the tips of his thumbs through frostbite while rowing 60 miles to the Newfoundland coast. His companion died on the second day, but he stoically rowed on for a further three days, using his blackened, frozen fingers that had been shaped like hooks to pull the oars.


His disability did not put an end to his venturesome life. On the contrary, he was challenged to do what many able-bodied men would not dare to do. After successfully running a liquor saloon in Gloucester he organised an expedition to the Klondike, hoping to get rich through prospecting for gold. Instead of travelling overland, he bought a schooner, the ‘Hattie I. Phillips’ in 1987, and sailed her with his partners around Cape Horn, but at San Francisco he sought more finance by lumbering at Portland, Oregon; thereafter lost his desire for gold and returned home.


What really set him apart from others was his insatiable quest for a challenge, and this time he decided he would sail single-handed across the Atlantic. Alfred Johnson had done it in 1876, but he was not literally ‘handicapped’, as was Blackburn. On 18th June, 1899, he sailed from Gloucester in the ‘Great Western’, a 30’ gaff-rigged cutter based on the lines of a shortened Gloucester sloop, and after 62 days he arrived at Portishead, England. Not content with his achievement of being the first handicapped person to sail alone across the Atlantic; in 1901 he did it again! This time in a smaller boat, the 25’ sloop, the ‘Great Republic’, only taking 39 days. He had set out from Gloucester on 9th June, and arrived at Lisbon, Portugal, after a fairly easy passage.


In 1902, after having shipped the ‘Great Republic’ back home, he sailed her to New York, then up the Hudson to Albany, along the Erie Canal to the Great Lakes and Chicago, from where he followed the Illinois River to the Mississippi and into the Gulf before cruising around Florida. There he sold his well-travelled and beloved sloop.


Wanting to make his third crossing of the Atlantic, he ventured to sea again on 17th June, 1903, in a purpose-built 17’ Swampscott fishing dory he named, ‘America’, but he had to accept defeat when worn down by a series of gales in which his tender vessel was twice capsized and had her hatch stove-in. He had dearly hoped to reach Le Havre, France, from where he would do an inland voyage through the canals and the River Rhone to Marseilles, before coasting westwards in the Mediterranean to the Straits of Gibraltar, afterwards completing an east to west crossing of the Atlantic.


Howard Blackburn died at the age of 73, and he was buried at Beechgrove Cemetry, Gloucester, in the Fishermen’s Rest section. He was a man who ‘truly’ lived by facing and overcoming adversity.

Hi, I found your blog while looking for Howard Blackburn. I borrowed one of your pictures of him for my post on the book Drifting into Doom about him and the Grace L. Fears. Your blog is very interesting and hope it's ok I used your picture, with a link in it to your site. Thanks. http://dorothystewart.net/2012/01/18/drifting-into-doom-book/

dorothystewart.net said...
This comment has been removed by the author.
8:37 pm