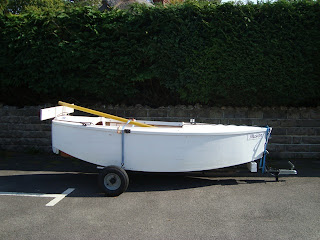 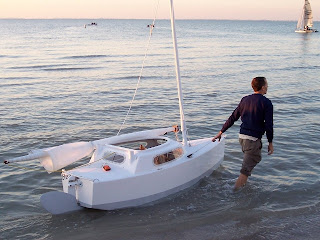 
Today I met up with Paul and his Matt Layden inspired ‘Illusion’, which is very similar to Matt’s ‘Elusion’, but without the cabin top.


By examining photographs and videos of ‘Elusion’ I had the impression that she was a very small boat indeed, but when I saw Paul’s ‘Illusion’ I was taken aback, because she looked much bigger than I had imagined. In fact, Paul’s boat is only marginally longer than ‘Elusion’, but when I saw her in the flesh, i.e., in 3-D, the bulk-effect was heightened. Somehow, the depth of the hull appeared much more than ‘Elusion’s’, but it was a matter of illusion! In fact, later when I got back home I compared photographs of the two boats, and I had to concede that their hulls are almost identical.


It just goes to show that you may make false assumptions about objects in photographs, because they are two-dimensional images - they don’t allow you to see things in the round. The latest 3-D TV gives a better indication of spatial form which is enhanced by the movement of objects and by the movement of the camera.


Paul wants to sell his ‘Illusion’, so if you are interested, have a look at his blog. (See link below)


Thank you Paul for showing me your boat today and for sharing your experiences of sailing and rowing her.