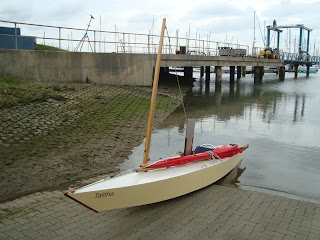 There was a good wind, but little sunshine - ‘White Cloud’ was the official description, according to the BBC forecast. Today was my only chance for sailing ‘Talitha’, because tomorrow, I shall be otherwise engaged, and the weekend looks pretty grim weather-wise.


High water at Burnham was 12.28 BST which was ideal for a test sail. The plan was to have a good beat up the river to Bridgemarsh Island with the flood; heave to there and have lunch; then run back to the Yacht Harbour on the first of the ebb.


Launching the boat was quite easy. I transferred her from the trailer to a piece of old carpet laid on the slipway; shipped the keel, fixed the rudder and rigged her. Meanwhile, as I parked the car and trailer, the water steadily crept up the slipway to float her off on my return. 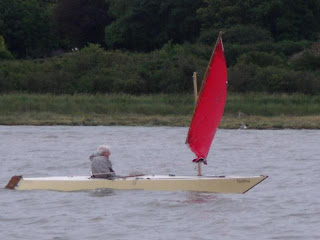 This photo is copyright of Peter Howard - please respect it.

Underway, I paddled her towards the Yacht Harbour entrance and hoisted a reefed sail. She effortlessly glided out to the River where I brought her on the wind. On the more exposed parts of the River waves were breaking, causing spray to fly back over the boat. She leapt off the waves and heeled until her leeward deck was close to the surface of the water. Under those conditions, more often than not, she tacked, but once in a while she needed a nudge with the paddle to bring her round. 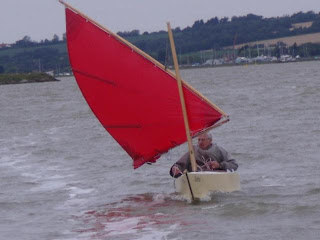 This photo is copyright of Peter Howard - please respect it.

There were no other small boats about, but there was the yacht ‘Grey Lady’, and on the run back to the Yacht Harbour, her skipper took photos of ‘Talitha’. He later met me at the slipway and kindly offered to send them to me by email. I am extremely grateful for his thoughtfulness and the time he spent sorting out the photos.


The only change I shall make to ‘Talitha’ is to exchange her thin rudder downhaul bungee for a thicker one, because there was a tendency for the rudder to rise when the boat was running at speed, at times almost planing.


I was pleased with the trailer, which does the job of transporting the boat well.


Back at home, I hosed the boat and sail to rid them of sea water. The test sail had gone well.
Posted by William Serjeant at 9:30 pm

Congratulations on the first sail Bill, she looks great.

Congratulations from me as well Bill.Must have been very exciting to feel this innovative craft come alive, never mind "almost planing with a reef in". Terrific.

Many congratulations! I've been hooked on the story of this boat from conception to launch. It's been just like waiting for a grandchild to be born.

How did the through-deck mainsheet work out? Why do you think she was reluctant to tack sometimes?

Best of luck to you and Talitha.

Thank you for all your comments.

To answer your questions: The sheet works well. I think she occasionally failed to come around on a tack because she was being stopped by the breaking waves, and there was a wind against tide situation. When that happens, the boat speed is little more than the water speed, which means she does not have sufficient way for the rudder to be effective - especially as the breakers knock her bow off. I've experienced this with other boats.

There really was spray flying around. Under those conditions I think she went very well - far superior to my Paul Fisher 50/50 which I could not have sailed, because of being too dicey.

A Paradox Matt Layden sailboat would not have performed to windward at all. She would have required an engine to make way.

So glad to see the whole process from start to finish. Very well done Bill,I will look forward to your continuing adventures - Bon Voyage