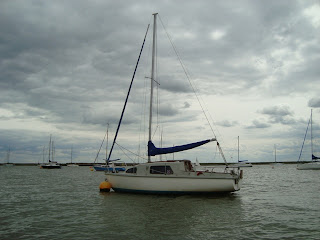 'Ladybird' at her Burnham mooring

My daughter is sailing towards Holland, not aboard her Seawych 19 ‘Ladybird’, but as crew on a much larger yacht. She asked me to check out her boat, because she had not seen her for a while. There were two things that required attention: the mooring rope had jumped off the bow roller and her rudder had been forced off the transom fittings. The Rice and Cole boatman had kindly put the rudder in the cockpit and he explained that there had been a strong southerly wind that coincided with a big spring tide; the combination of wind and low water set the boat in shallows over a mud bank. That explained why I found caked mud on the rudder. 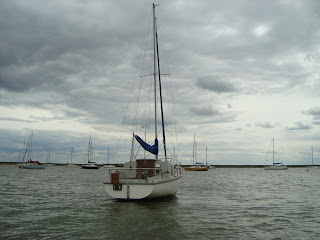 Everything else was fine. I enjoyed being aboard my old faithful little ship that had looked after me so very well when I sailed her to Falmouth and back from the River Crouch last year.


I was reminded of Dylan Winter of ‘Keep Turning Left’ fame when he looked at a similar Seawych laid up in a barn. She was in a neglected state, but with a bit of tender loving care it was possible she could be brought back to life. Dylan had been having a spot of trouble with the diesel engine in his Mirror Offshore 19; in fact it more or less gave up the ghost and came adrift from its mountings. For a fleeting moment he thought he would have to ditch his much loved boat and get hold of another at a rock bottom price – the Seawych was going for free! Guardian angels came along and repaired Dylan’s engine and he was as happy as a sand boy, but only a few weeks later the engine’s gear became stuck in forward. The last I heard was that he was looking at some old outboard motors that may help out.


Because my daughter is crewing on three other yachts, she has little time for sailing hers, and consequently she has advertised the boat at Apollo Duck. If you are looking for a cracking little sailing cruiser, she might be the answer. You could try making an offer.

‘Ladybird’ for Sale at Apollo Duck