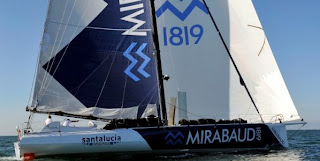 Team sailors Dominique Wavre and Michèle Paret aboard their yacht ‘Mirabaud’ are competing in the Barcelona World Yacht Race. At the time of composing this, their dismasted yacht is in the Southern Atlantic Ocean about 650 nautical miles east of Argentina and 450 miles north of the Falkland Islands. The IMOCA Open 60 is under engine while riding out a storm. Neither of the crew is injured.


At 1640 UHT Michèle radioed the Race Officials at Barcelona informing them that the mast had failed. It had broken near the top, and due to the movement of the yacht this upper piece subsequently damaged spreaders below it. The crew therefore decided the best course of action was to bring the mast down in a controlled way to avoid further serious damage. They achieved this, but not without damaging some of the stanchions.


When sea conditions permit, they plan to set up a jury rig with the boom which they managed to save. Their intention is to sail towards Argentina. Meanwhile, the leaders, Jean-Pierre Dick and Loïck Peyron, aboard Virbac-Paprec 3 are 1,085 miles south of the Equator, and their nearest rivals, Iker Martinez and Xabi Fernandez, aboard MAPFRE are 345 miles behind.