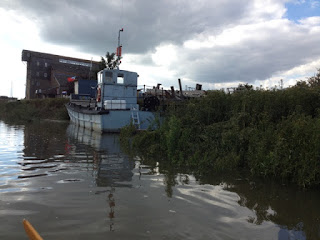 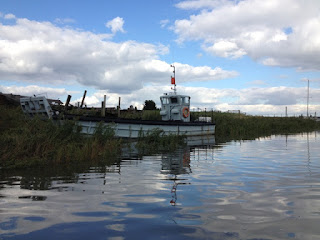 When Pike and I were in the company of Rat and Mole ( http://bills-log.blogspot.co.uk/2015/09/messing-about-with-pike-rat-and-mole.html ) last Saturday, we happened upon a fascinating floating object nestled amongst the reeds at Battlesbridge, and a little research has revealed it probably was an ex-Royal Marine LCVP. The letters stand for Landing Craft, Vehicle and Personnel. Such vessels were used by the Royal Marines for transferring assault personnel and their vehicles from ship to shore, being designed with a flat ramp at the bow that can be lowered for quick and easy access to a beach. Many LCVPs* were built by the Dorset Yacht Company at Poole in 1965.

I have since discovered that this particular Landing Craft named ‘Explorer’ is used for seal watching and bird watching at Foulness and associated islands such as Potton, Havengore and Wallasea, via creeks branching off the River Roach.

Rat and Mole were smitten by more than exciting possibilities of adventures and happenings - if only they could stow aboard this unusual water craft. No doubt when we meet again I shall hear all about them.

Posted by William Serjeant at 9:39 pm

Shortly after the Hitler War the south of England was awash with many ex naval vessels for sale. At the time my maternal Grandfather was living on the old Thames Barge "Swift" in Benfleet Creek. He purchased a small landing craft and converted it to a launch and spent many years exploring the Thames and Medway estuaries. I was too young to remember unfortunately, but according to my Mother they enjoyed many happy days away. And what was its name I hear you ask?......"Invader" of course! ��

Well, Paul - thanks for that. 'Invader' was an appropriate name. Thing is, unless old folk tell us of times past, we remain ignorant about them, and yet they can have great significance in our lives.

During the war, kids used to go to Saturday morning cinema where they saw cowboy fimls, Laurel and Hardy, Lone Ranger etc, but they also saw news clips of what was happening on the war front. I can't specifically remember seeing film of landings on beaches, but I guess I did.