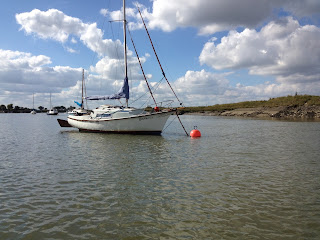 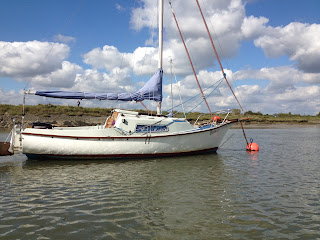 When I was rowing on the River Crouch not so long ago and I came across this Privateer 20. She was designed by Norman Howard who also designed the Shipmate Senior.* The Privateer 20 is a larger version, but with a clipper bow. Both boats have centre-plates and kick-up rudders. Built by Smallcraft of Blockley in the early 1970s, the Privateer could be rigged as a sloop or as a gaff cutter. The more rakish and attractive to me is the latter. Incidentally, Tony Smith (Creeksailor) rigged his Shipmate Senior** as a gaff cutter. Apparently the conversion from Bermudan sloop turned out to be very successful.

You can learn a lot more about Privateer 20s by watching John Turner’s videos. (See Links below)

Loving the pics of my Bo. Thanks Bill made my day to see her worthy of you site. Hope all is well and feel free to say hello if you see me aboard.