A Reality Check According to Boats Owned 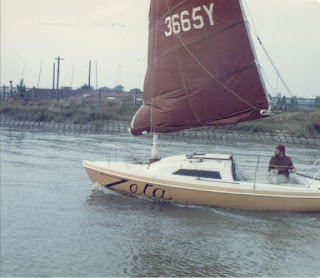 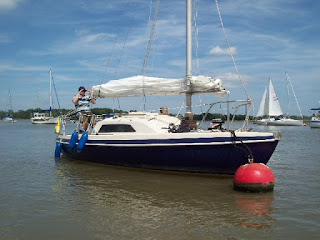 Today I had an email from a friend who told me that ‘Zeta’ was for sale. I owned two boats with that name. The smaller of them is for sale; the other was wrecked on the far side of the Atlantic.*

Looking at the advert and the associated photographs, I was reminded of times I had sailed the little boat. Memories that came to mind were of sailing her to Holland when she was first rigged as a Bermudan sloop. My wife and our youngest daughter joined me at Amsterdam for a cruise of the inland waterways. We had a fantastic time.

Another occasion was far from fantastic. I was caught in a gale in the middle of the English Channel between shipping lanes north and south. The worst of the gale came in the middle of the night. The experience was frightening and very physical. At one point I was sitting on the floor, wedged between the side bunks, but I couldn’t stop myself from being thrown onto one of the bunks by the severe motion.

There was also the time I tried taking a shortcut around Start Point by keeping close to the rocks. We got caught on the edge of the race, and waves came over the boat, completely filling her cockpit. She continued sailing as if nothing had happened, but it took a good many minutes for the water to exit through a single drain hole at the rear of the cockpit.

The advert for the sale of ‘Zeta’ has made me think how fortunate I have been to have owned her and others like her. By clicking links below you can see photos of most of them.

Importantly, the advert has made me realize how old I am. I bought ‘Zeta’ in 1977 – that’s 38 years ago! Facts are facts, and the reality is that I am no longer the chap I was. No matter how much I would like to buy ‘Zeta’, realistically, I could not do the sort of things I did with her in the past, and like other ‘old gaffers’, I can only reminisce, for as long as I can.

Posted by William Serjeant at 9:20 pm