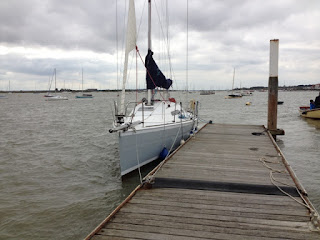 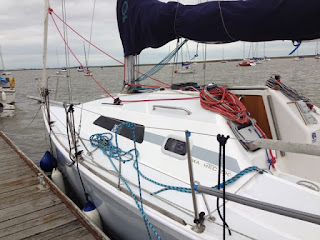 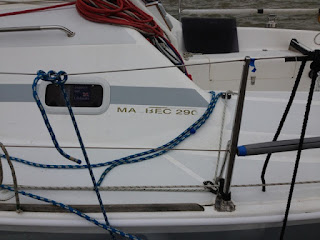 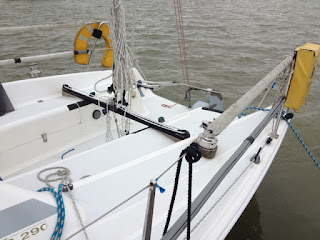 I saw this boat on 28th August moored to a Rice and Cole pontoon at Burnham-on-Crouch, and I was attracted to her clean, streamlined appearance, giving the impression she was very swift. She could be described as racer/cruiser, with more emphasis on racing than on cruising. This class of yacht was designed by Pablo Matracchio and built in Argentina. All control lines are led aft, and her self-draining cockpit is large enough to accommodate a crew of six who will have little to do when racing on the river, except to be mobile ballast and trimmers of sails. Prolonged coastal racing would require more effort, including doing the navigation, watch-keeping, preparing meals, cleaning up and general chores.

Assuming she’s the Malbec 290 for sale* at Rice and Cole, her internal mouldings have built into them a galley to port with a sink, and a heads and a shower to starboard. In the aft cabin there’s a double bunk. She has a Volvo 15 HP diesel engine. Altogether she’s an attractive package for someone who is willing to part with £30,000.