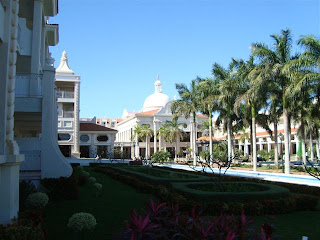 When you are staying at a hotel for a fortnight, one day is very much like another, and you can lose account of time. Therefore at the beginning of our holiday I made a calendar so that I could mark in planned events. We had in mind a day visit to Xcaret Eco Park, first to swim with dolphins, then to see jaguars, monkeys, stingrays, manatees and butterflies, plus craft products, including ceramics and woodcarvings. There would be two shows to watch: a horse show and a spectacular theatrical production in an enormous indoor arena with hundreds of actors portraying a potted history of Mexico. We also wanted to spend a day at Coban to see a traditional Mayan Village and to climb the highest stepped pyramid temple in Mexico. We would arrange our own passage on a ferry to the island of Cozumel and go by local coach the forty miles to Cancun. All of these outings I recorded on my makeshift calendar, along with bookings to dine at various restaurants within the hotel complex. 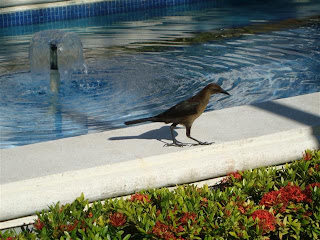 On our fourth day, which was a Tuesday, we booked and paid for our planned excursions, then retired to the beach for a swim in the sea and to sunbathe. We also explored the beach as far as we could walk in an hour. There were several scuba boats being refuelled while anchoring off the beach. Usually the diesel was taken in large plastic containers by jet bike from the beach. Divers dressed in their black neoprene outfits waded to their boat and carried their oxygen cylinders at the same time. If the sea was too rough for the boats to anchor close to the beach, jet bikes were used to ferry scuba divers and their equipment to and fro between their boats and the beach. 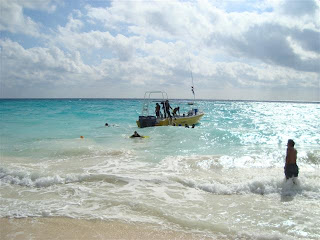 That evening we dined at the Agave Restaurant for sampling a gourmet meal of Mexican fare. After eating our meal we strolled along the road leading to several hotels. We also looked at local shops and found a good quality silver jewellery store where my wife bought a pair of chunky earrings for one our daughters. 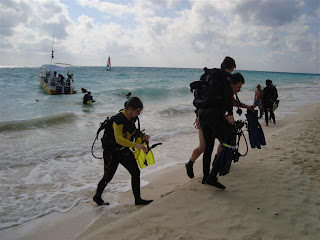 I was a little frustrated because my miniature laptop had a glitch. It was wrongly configured so that there was a conflict of Internet Suppliers’ addresses which meant that the only way I could gain access to the World Wide Web was by paying for the use of a computer at a the hotel’s Internet café, which happened to be one of the bars. Only later did I manage to sort out the problem by changing the settings of my laptop. By then it was too late for uploading a daily Blog recounting our experiences. I resigned myself to writing an account of our holiday on my arrival home. Hence, you are reading this.
Posted by William Serjeant at 8:48 pm