The day for our second organised visit by a tour operator had arrived, but the sky was overcast, and as we were having breakfast, down came the rain. Nevertheless we joined others in the coach that was taking us to Coba where we were to visit a Mayan village and climb the tallest stepped pyramid in Mexico. Because we were in a coach set aside for a French speaking guide, we were transferred to one where the guide spoke English; his name was Ricardo. We discovered that there were two other people from England and mainly Canadians and Americans onboard.

By the time we arrived at the venue it was still raining; therefore Ricardo suggested we may like to buy plastic capes from one of the trinket shops. Most of us did; then we set off on foot along a rough track through the rain forest to the first of the pyramid temples. 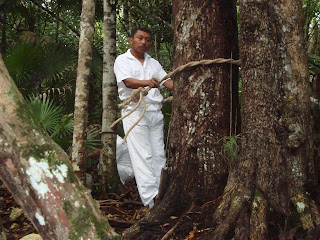 
En route we were given a demonstration of how sap was taken from a gum tree for making chewing gum. A man climbed the tree by using a length of rope looped around its trunk. He gripped the bark with his bare feet and at the same time flicked the rope up or down to make progress upwards or downwards as he wished. When near a point where the first branches spread apart he mimicked cutting into the bark with a machete for making a channel through which sap would flow to the base of the tree where it would be caught in a curved bowl. The solidified mass of the sap would be broken into small pieces and chewed. That was the earliest form of chewing gum.


On our arrival at the first of the stone temple pyramids, Ricardo did his best to describe how it was used by the ancient Mayans. The lecture over, rain continued to fall, and we walked along a rough track that led to a shack where we were to have a buffet lunch. The meal was adequate, but not attractive, and I was a little dubious about the hygiene aspects of its preparation. In retrospect, neither of us suffered with a tummy bug as a result of eating the food.


The next part of our ‘adventure’ was a walk of about a mile-and-a-half along a slightly better track than the one we had previously traversed. Those who would prefer to be taken on rickshaw-type tricycles could hire them, and boys to do the peddling. We chose this option. Each tricycle had a bench seat facing forwards and a large umbrella which kept the rain off. Our boy followed those who were on foot, but at one point the pathway diverged and the walkers took a shorter, but rougher route.


We who were on tricycles arrived at the foot of the Coba pyramid before the walkers and when they joined us, Ricardo continued his discourse about how the Mayans lived. We were then invited to climb the pyramid. There were no provisions for safety, save for a single rope stretching from top to bottom that was fed between loops of iron embedded in the large rocky steps. Altogether there were 120 of them. In my imagination, people looked like an army of ants climbing up and down a huge mound. I followed my wife closely so that if she were to slip, I might have a chance of halting her fall. About half way up she paused to get her breath; then we continued until we reached the summit which consisted of a rough stone, unfenced platform. There a Canadian who was a bit younger than me congratulated us on making it to the top. He offered to take a photo of the two of us, which we gladly accepted. It was like being on top of Everest. The only thing missing was the Union Jack! 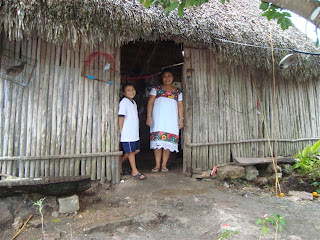 
After arriving back at the coach we set off for a Mayan village of which Ricardo was full of praise. He extolled the self-sufficiency of the villagers who produced all they needed for their existence. The men worked the land, bred pigs and poultry, and they harvested fruit and nuts from trees. Other plants were used for medicinal purposes. The women kept home and did things like weaving fabrics, making hammocks, preparing and cooking foods and looking after the children, all of whom attended school on a shift system. 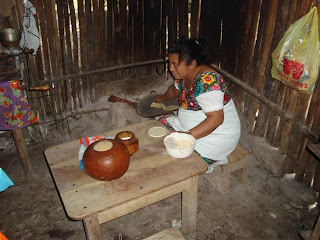 
My view of the villagers’ existence was not as rosy as Ricardo’s. I saw poverty and deprivation - a people with not much hope of improving their existence, and I felt a little uneasy in that they were being exploited by tour operators. If they were being given appropriate payment for their services I believe their living conditions would have been better. We were exhorted by Ricardo not to give any money to the children or the adults for that matter. 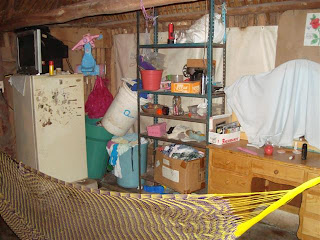 Reality - this is home!


The final part of our outing was a visit to a pool that was supplied with water by an underground river. Those who wished, could have a swim in it. Only a handful did. 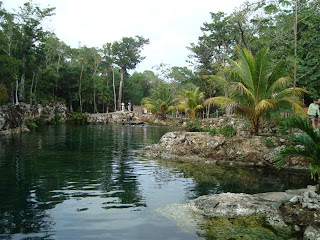 
Back at the hotel we were in absolute luxury by comparison with the Mayans in their slums. I call them ‘slums’, for that is what they are. Our visit put things in perspective and made us realise how very fortunate we are, and the experience gave us a sadness regarding the lot of those poor Mexicans.


It had been a very long day that was only marginally marred by rain which eased off in the afternoon and disappeared altogether before evening. I was glad I had seen the pyramid temples and that I had been able to share the experience with my wife. She said the best part of the trip was when she found herself standing on top of the big pyramid - she also enjoyed the tricycle ride.
Posted by William Serjeant at 2:16 pm