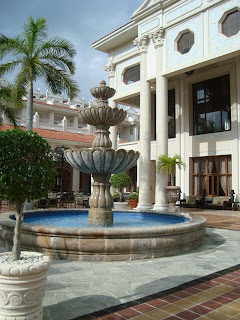 With only two more full days, inclusive of our 13th, we realized our holiday was coming to an end. There was a need to prioritize what ought to be done before our departure. My wife wanted to find one or two mementos she could take back home. From an email we had received we learned of a relative who was seriously ill in hospital. Obtaining up-to-date facts about the situation was not easy, because our phone card was not working, and making contact by using Skype was proving illusive. Linking up across time zones was also problematical. Emails were the best means of communication, but they were not always replied to until hours later, sometime days. 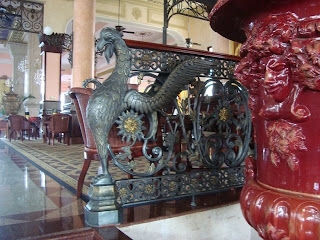 The weather was still unsettled, so that it was not exactly perfect for sunbathing and being on the beach. A few hardy souls were out on their loungers, in the hope that the sun would break through the clouds. We were philosophical about the situation because the cooler conditions were better for us, as we intended visiting local shops. 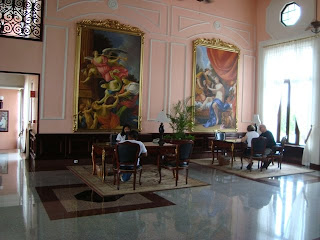 Despite a thorough search of Playacar, which took most of the morning, my wife could not find what she wanted. We returned to our hotel for lunch. Afterwards we sat beside the swimming pool where we were protected from the wind, and by then the sun was more in evidence. Mid afternoon was an ideal time for Skyping with folk back at home; therefore I set up my miniature laptop in the foyer of the hotel. Unfortunately, no one was available at the other end, and there were no new emails with information about the patient in hospital.


Because I wanted a visual record of the architectural features of the hotel and reminders of the hotel’s interior, I took the opportunity for taking more photos than I had already acquired. Then I rejoined my wife at the pool, by which time there was only a scattering of clouds and the temperature was pleasantly warm. Drinks from the pool bar were refreshingly cool. This was a life of ease and luxury to which we were not accustomed. Somehow there was a sense of fruitlessness to such an existence, and I was not at all reluctant about leaving for the UK the day after the next. 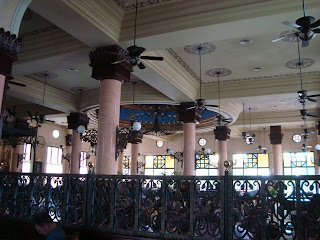 As I was eating my evening meal in the buffet restaurant I was conscious of the fact that a whole new lot of guests had arrived. They looked bleary-eyed and their skin was a pale white. Most had arrived from snowy Canada where the temperatures were subzero, and a minority came from a colder than usual Europe, mainly from Germany and France, and a few from Britain. We found ourselves sat next to a couple who lived in Berkshire. Like us, their flight had taken ten-and-a-half hours from Gatwick. They were zonked! They said they were determined to keep awake until 10.00 p.m. Mexican time so as to adjust quickly to the new time zone. I felt for them, but soon I would be home trying to adjust to Greenwich Mean Time.
Posted by William Serjeant at 11:51 am