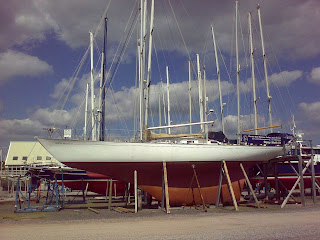 Most people will have heard of Sir Francis Chichester who was knighted by Her Majesty The Queen on 7th July 1967 in recognition of his record-breaking circumnavigation. This voyage aboard his purpose-built ketch, ‘Gypsy Moth 1V’, took just over nine months to complete, of which 226 days were spent sailing, and 48 days ashore. Francis left Plymouth on 27th August, 1966 and arrived back there on 28th May 1967.


The 28,500 mile marathon was not without its problems, some with failures of gear and others because of difficult sea conditions. The 54’ cold-moulded yacht designed by Illingworth and Primrose had a fundamental design flaw which, in certain sea states, caused her to broach. At a stopover in Sydney, Francis employed Warwick Hood, the Americas Cup designer, to come up with a remedy, which was a modification to her keel, in the form of an extra section added to it. With more than 2,000 miles to go before the yacht would reach Sydney, the wind vane steering system failed. This necessitated Francis to devise a method of self-steering which he accomplished by balancing the sails in conjunction with shock-cords attached to the tiller. On the homeward leg, he had a very hard time when he encountered heavy seas near the Cape of Good Hope, and the yacht suffered a 140 degree capsize.


To commemorate Francis Chichester’s achievement, ‘Gypsy Moth 1V’ was incarcerated in a dry dock at Greenwich, near the tea clipper, the ‘Cutty Sark’. She was open to viewing by members of the general public, of which I was one. I remember being intrigued with a pendulum chair in which Francis could relax and remain upright. His body would have been subjected to vertical movement and some sideways movement as the yacht rose and fell to the undulating seas. I sat in the chair and was completely motionless. I tried to imagine what it would have been like for him during a raging storm.


In 2005 ‘Gypsy Moth 1V’ was completely restored from severe damage caused by rainwater and the pounding of visitor’s feet over a period of years while stationary in her concrete tomb. Under the sponsorship of the Yachting Monthly Magazine and the UKSA Sailing School, she was commissioned to undertake another circumnavigation, but this time with crews comprised of disadvantaged children who sailed on various legs of the voyage. Through a navigational error the yacht suffered a catastrophic grounding at Rangiroa, an atoll in the Tuomotus. She was taken off the reef by a team of experts and shipped to Auckland, where she was repaired, before continuing and completing her second circumnavigation.


Today, she is up for sale at Berthon Shipyard, Lymington. There I took the photo you can see above.