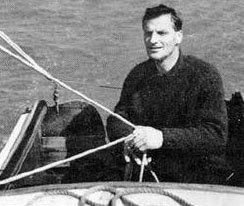 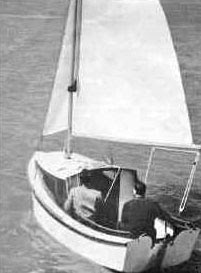 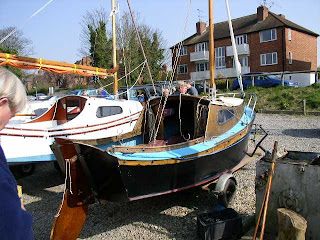 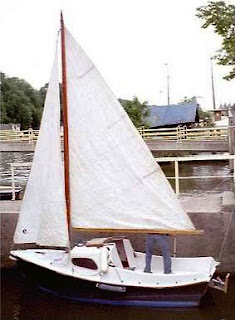 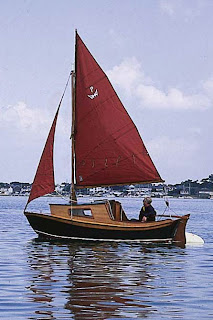 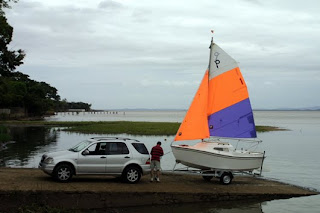 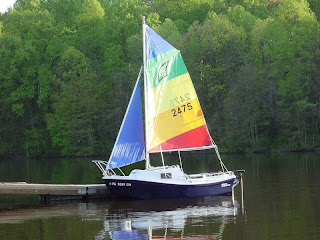 
Synonymous with the West Wight Potter is the name of her designer, Stanley Smith, who had designed his famous ‘Nova Espero’ and sailed her across the Atlantic from West to East in 1949. After modifying the boat by adding a cabin top, he sailed her back across the Atlantic in 1951. Later he established a boat building business on the Isle of Wight and in 1960 he produced the first version of the West Wight Potter 14 trailer sailer, eventually building 150 of them. This very basic, two berth gunter-rigged boat was made from marine plywood. Having a shallow draft of only 6” she was perfect for gunk-holing. Stanley said of her, “The high shoulders forward, give the boat those few important inches of freeboard and just where they are needed to discourage the bow wave from getting carried up by the wind. The lower freeboard in the waist is where the natural form of the surface of the sea dips down when the boat is moving and a green sea seldom finds its way on board here. The kick-up towards the transom: it is very reassuring when contending with awkward following seas to have more freeboard aft."


A customer from Sweden ordered a West Wight Potter 14 and Smith decided to deliver her in person by sailing her up the English Channel, across the North Sea, and around Denmark to Kloster Fjord. Due to pressure of business he made a very late start in the season, on 12th October, 1965, eventually reaching his destination on 17th November, after a series of traumatic experiences, including running before a Force 9 gale and abandoning his boat in surf as she was about to be driven onto the beach just north of Hvide Sande Harbour, Denmark. The full, dramatic story can be found here: http://potter-yachters.org/stories/ssmith.html . Smith was fortunate to get away with his life, when he broke the Golden Rule, never to leave the boat, which was later found with no damage, except to the deck where the Samson post had been torn off during a last-minute failed attempt by the skipper of a passing fishing boat to tow the stricken vessel back out to sea.


Already a popular small trailer sailer, the account of the above voyage was good publicity for Smith’s boat, and as a result, West Wight Potters were sought after, not just in the UK, but in the States and Canada. Even now, International Marine in the US, boast that they have been building their AX version of the Potter, which they call the Potter 15, for over 42 years. She’s an entirely fibreglass vessel in the spirit of the original wooden sailboat, but with improved accommodation and the advantage that she’s almost maintenance free. (http://www.westwightpotter.com/) In their web site, International Marine state that over 2,600 Potters sail world-wide. Altogether there have been various versions: The A-Type, the original plywood boat; the B-Type, the first-UK fibreglass Potter 14, built in the late 60s, and in the US Herb Stewart developed a fibreglass version. Afterwards there came the C-Type which was produced by different companies, including West Wight Laminates on the Isle of Wight. A D-Type was manufactured, but, but I’ve not been able to find details of who built her; neither do I know if she differed to any significant degree to her predecessor. In 1987 the Potter Boat Company in Dorset was building what they called the Nova version and by 1991 she was sporting a quadrilateral sail similar to US Potters, but essentially, she was the C-Type without side decks either side of the cockpit. This boat had quarter berths instead of V-berths up forward. The AX Model is being produced in Brazil, and an E-Type is for sale in the UK. (See link below) The E-type is different in several respects to the original Potter, but has the general ‘feel’ of the classic 60’s version, despite her GRP hull, and her wooden cabin top treated with epoxy.

The Potter 19 is an entirely different vessel, and although produced by International Marine, must not be thought of has having been evolved from the West Wight Potter 14, or 15.


History of the West Wight Potter 14