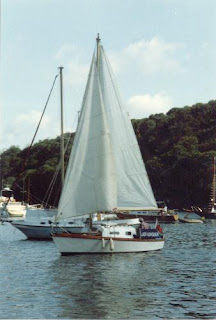 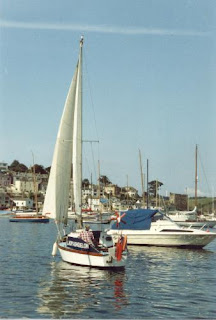 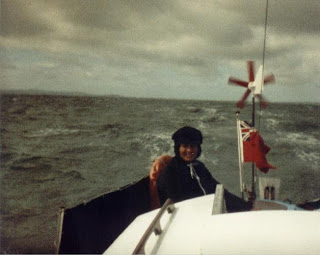 In April 1988 I became the owner of ‘Lady Ashquelon’, a Van de Stadt Buccaneer. She was a lightweight hard-chined plywood yacht that had been built by her first owner to sail from the UK to Israel where he intended to live. Things did not work out for him, so he decided to sail the yacht back to the UK via the Straits of Gibraltar. Both crew and yacht survived capsizing while in a gale in the Mediterranean. After arriving in the UK ‘Lady Ashquelon’ was sold to a captain of a cross-channel ferry. He kept her at Sandwich for several years until I bought the boat from him and sailed her to her new mooring at Fambridge, on the River Crouch. There I prepared her for a cruise to the Scilly Isles and I set off on 22nd June for what proved to be a great adventure. I had equipped the boat with a Wasp wind charger for powering an Autohelm and the combination worked well.


The cruise was memorable for strong winds that kept me anchored or port-bound in between sailing, but exploring my favourite islands, the Scillies, was wonderful. I arrived at Hugh Town on 9th July, and on 12th I moved to Watermill Cove to avoid the swell and sit out the bad weather, but by the next day the wind had gone around to the North West which brought about uncomfortable conditions. The only option was to shelter at Porth Cressa. There I had a real battle to beat into the anchorage, and on the way, the bottom of the dodger was torn from the pushpit by the seas. I had a pleasant surprise on Sunday, 17th when I saw Dave Williams’ ‘Shamekee’ anchored nearby. I had met him before he set out to sail around the world and here he was on the home leg. That evening along with his crew and the Irish crew of the yacht, ‘Camelion’ I enjoyed a barbeque on the beach before retiring to the ‘Turks Head’ for a drink and to play darts. On Tuesday, 19th I met Elvin and his crew, Martin and Margaret aboard the Tahitiana sloop, ‘Dapedus’.


Finally, I broke away from the Scillies on 20th and made it to Helford before dark. There I met Chris Reece who at the age of 19 designed and built his steel junk-rigged double-ender that he lived aboard at Millbrook. There was a force 8 on Monday 25th which caused me to set two anchors for fear of being driven ashore. While at Falmouth I met Bill Robinson aboard his ‘Idle Bird’, another Buccaneer. Bill wrote a Pilot for the Scilly Isles. I also met Chris and Sue Trott cruising their beautiful German Folkboat.


From the above you can savour the flavour of the cruise. To describe it in detail would take far too long, but I must mention the glorious week of sailing I shared with my youngest daughter exploring the Solent, before sailing up the English Channel and across the Thames Estuary to my Fambridge mooring, arriving there on Friday, 26th August.


Statistics of a Buccaneer

I wish to ask you a few questions offline about your Buccaneer. If you could please coontact me on volney@xtra.co.nz