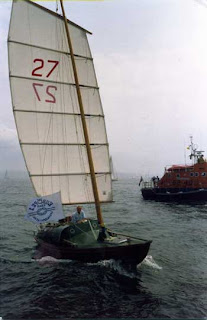 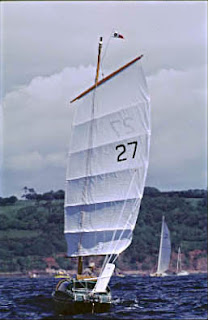 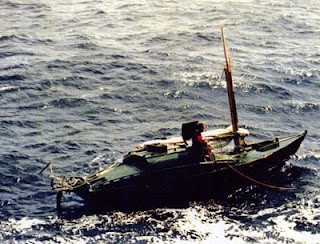 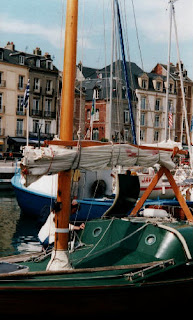 Early on the morning of Monday, 21st August, 1978, little ‘Zeta’, my Hunter Europa 19, was anchored off Bembridge, on the Isle of Wight. I had spent the night aboard having a comfortable sleep recuperating from a 70 miles sail the previous day from Cherbourg. When I awoke and took a look outside, I discovered the famous, ‘Jester’, anchored only a stone’s throw away. She looked workmanlike, entirely painted in dark green. She was the original, ‘real’ carvel Folkboat that Blondie Hasler had rigged as a junk. Aboard her was Mike Richey who had bought her in 1964 and had raced her in three single-handed trans-Atlantic races: 1968, 1972, and 1976.


At 0900, before heading up Channel to Newhaven, I sailed ‘Zeta’ around ‘Jester’ while taking photos of her. Mike popped his head out the circular hatch at the front of ‘Jester’s’ cabin and greeted me. He asked where I had come from and where I hoped to go. After replying, I sought permission to take his photo, and he agreed, but not before he had combed his hair! He also requested that I send him a copy of the photo which I duly did. Mike subsequently raced ‘Jester’ in four more trans-Atlantic races, but in 1986 while on passage from Nova Scotia to Plymouth she was flooded, because her observation hatch failed when she was rolled through 360 degrees during a storm. Considerably damaged and with her mast broken in two, she was taken aboard the British ship, ‘Geestbay’. Later that year, she was restored at Alec Blagdon’s yard, but on 15th July, 1988 while participating in her final TRANSAT, she was abandoned because a rogue wave had severely damaged her superstructure. The 60,000 ton bulk carrier, ‘Nilham’ took her in tow, but she succumbed to the seas. Enthusiasts formed the Jester Trust to have a replica built in time for the 1992 Race. When Mike was, in his own words, “closer to 90 than 80”, he suggested to the Trust that they should sell her to someone who would look after her. They agreed to let her go to Trevor Leek, who was a prime mover of the Jester Challenge races.


Well, it was with sadness that I learned of the death of Mike Richey on 22nd December, 2009. I had met him for the second time when I was the skipper of the ‘Speedwell’ based at Brighton. The 1908 Whitstable smack, then a ketch, was on loan to the Discovery Dockland Trust for the purpose of training unemployed people under a Margaret Thatcher scheme. Mike heard of the Trust and wanted to offer the use of an open junk-rigged boat he owned or had access to - I’m not sure which, but the directors of the Trust felt that the boat was not suitable, and declined Mike’s offer. This generosity was typical of him, and over many years his contribution to the world of yachting has been appreciated by those who have benefited from his imparted knowledge, particularly in the realm of the ‘art’ of navigation. He considered it an ‘art’, rather than a science, and he would have known, because he was a founding director of the Royal Institute of Navigation.


The Royal Institute of Navigation