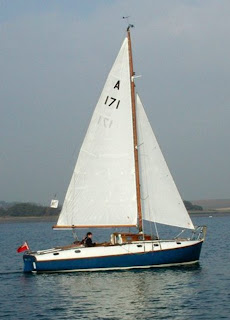 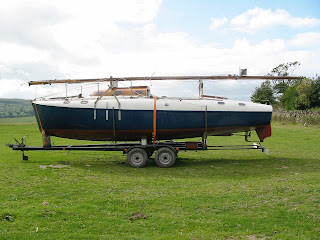 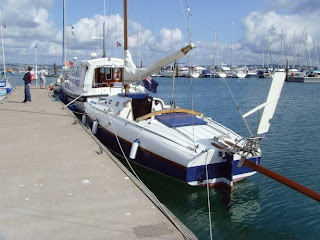 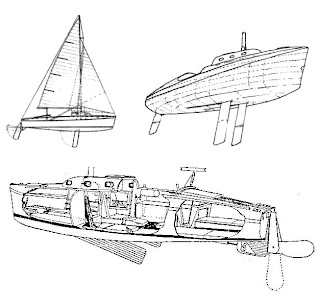 I used to own a Fairey Fulmar named ‘Petronella’; she was a 20 foot shortened version of a Fairy Atalanta 26. Instead of having two drop keels she had one, and she lacked the aft cabin astern of her cockpit, but I’ve always been attracted to Uffa Fox’s lightweight 26 foot hot moulded four berth Atalanta based on Alan Vines’s 24 foot prototype, the A1. Alan Vines was a senior executive of Fairey Marine on the Isle of Weight when they produced the Atalanta 26, the Titania, the Atalanta 31 and the Fulmar, besides a number of dinghies, including the National 12 Firefly. Uffa was their design consultant during the 1960s.


A friend of mine bought an Atalanta 26 and I had opportunities of crewing for him. She could carry full sail up to Force 4, which was great, because we seldom had to shorten sail by using the boom roller reefing. She had a substantial boom horse for stowing her boom and mainsail when the boat was not sailing. Her large centre cockpit with a whipstaff tiller gave her crew security and protection from green water. Her halyards and sheets could be controlled from her cockpit and her headsails and anchor could be deployed from the forehatch. Being moulded with agba veneers impregnated with resin, she was light and strong, but care had to be taken not to allow her to settle on unfriendly objects that may puncture her hull. The same could be said of any vessel that dries out directly on her hull. Bilge keels protect a hull, but the Atalanta’s iron keels were housed in boxes within her hull, giving the great advantage of a draught of just 1’ 6” when they were fully raised. She could sail with them up, but understandably her windward performance suffered. When her keels were fully down, she drew 5’ 9”. Her beam was 7’ 9”. As far as I can remember, my friend’s boat did not have standing headroom, but I know that at least one Atalanta was built with an extra moulding to her cabin top that gave her crew full standing headroom.


Atalanta’s were conceived as trailerable boats, not as trailer sailers. Their trailers generally had four wheels - a few had six, for distributing the weight of the two ton boat, plus the weight of the trailer. These comfortable ‘family’ yachts were capable of being taken by road to new cruising grounds, perhaps for extended holidays afloat. Setting up their rigging, and preparation for launching was too time-consuming for day sailing or short-stay outings. Atalantas were mostly used for coastal sailing, but some crossed oceans.


I have been speaking in the past tense; however, the Atalanta Owners’ Association’s web site maintains that 100 or more of these classic yachts are owned by the Association’s members, which brings me to assume that most of these fine vessels are in commission today. Sadly, production ceased in the early 1970s; in the main, this state of affairs was brought about by the manufacture of cheaper fibreglass boats requiring less maintenance.


Where does the name ‘Atalanta’ come from?
In Greek mythology, Atalanta was a skilful huntress, very fleet of foot. Born in Arcadia, she was left to die, but was suckled by a bear. She played her part in the Calydonian boar hunt when she drew first blood, and she was rewarded by Meleager with the pelt of the boar. Warned by an Oracle that she should not marry, she made a condition that her suitors must run a race with her, but only he who could beat her would wed, and the others would die. Craftily, Hippomenes won by dropping three golden apples which Atalanta foolishly stopped to retrieve. Later, she and Hippomenes desecrated Cybele’s sacred temple by making love there; consequently they were punished by being turned into lions that were yoked to Cybele’s chariot.

Hey, nice site you have here! Keep up the excellent work!
Custom Trailers