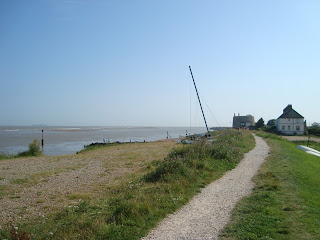 Looking out to sea; note breakers on shingle banks 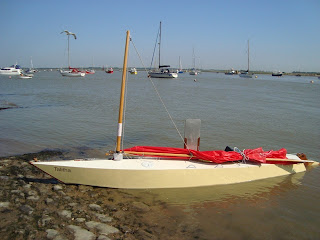 Yesterday I ended my account of ‘Tailitha’s’ outing on the River Deben as being ‘an excellent sail’. That was true – surely the best out of five.


When I set off from the Felixstowe Ferry Slipway the wind was fairly light, but by early afternoon it piped up to be around a Force three – that’s eight to twelve miles per hour, or twenty to twenty eight kilometres an hour. On the ebb the wind caused the water to break, typically with small foaming crests. 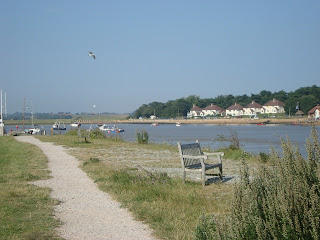 View into the Deben from the sea wall

There were a good many yachts sailing, and a handful of dinghies, among them a Topper, a Wayfarer and an open clinker boat similar to a Tideway. ‘Talitha’ could more than match the Wayfarer going to windward, but she may have been badly sailed by her crew. I didn’t have opportunities for comparing my boat with the others, as we were going in opposite directions.


For about a quarter of an hour the smaller boat matched a Shrimper tack for tack, but the cruiser was ahead from the beginning which enabled her skipper to foul wind for ‘Talitha’. Every time I tacked, he covered me to keep his advantage. Being ahead, he turned a corner and got clean away on a fetch.


My outing on the Deben was particularly satisfying because of varying conditions: a gentle downwind at the start; then a stronger gusty wind; the challenge of making over the ground against wind and tide to the anchorage by the bluff beyond Shottisham Creek. Then, after anchoring for lunch I had a demanding windward sail that saw me spilling wind now and again during gusts. When a motor yacht passed at speed, the top of her wake plonked onto my lap! I wasn’t prepared for it, because ‘Talitha’ normally rises to regular waves, even ones with breaking tops. 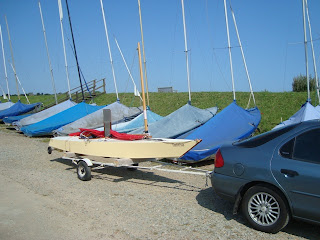 Keel in the boat when she was on her road trailer

There was an interesting situation at the slipway, because several people wanted to retrieve their boats and I didn’t want to be in their way. I did what I hadn’t done before at a slipway, and that was to pull the boat onto her trailer while her keel was in her. As soon as she was on her trailer I gently towed her to a nearby boat park of the local sailing club. I shall consider reversing the procedure for launching, because it would require less time on a slipway. All the preparation could be done beforehand, so that she would be ready for sailing. I would only have to park the car and trailer, and then set off.


Tideway 12 Dinghies (Article on this Blog)