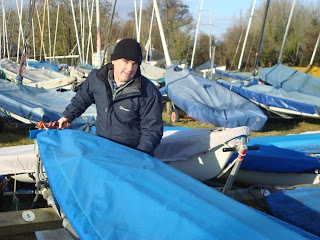 I was in Devon on 23rd January and I was invited by my nephew to watch him sail his Laser at Roadford Lake Reservoir. The temperature was almost zero degrees Celsius, despite the bright sunshine, and there was a biting Force 2 from the northwest. I was thankful that I would not be sailing on that very cold morning.


Two girls and one broad-shouldered lad were preparing their windsurfers for an outing on the lake. I subsequently learned that all three were in training for the Weymouth Olympic windsurfing events of 2012. This trio are siblings of the Sills family: Sam, Saskia and Imogen. I take my hat off to them for their tenacity, determination and dedication to achieving the ultimate prize, Olympic gold medals for themselves and for Great Britain. 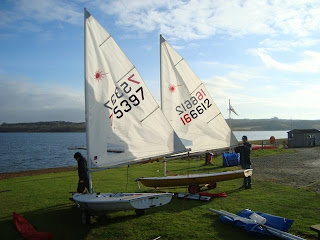 Off to launch his Laser


After initially taking photos of my nephew preparing his Radial Laser dinghy I returned to his car for self-resuscitation, which included vigorous massaging of my fingers and toes to bring them back to life. I further fortified myself with hot coffee from a flask and a bar of chocolate. These necessities reminded me that I was no longer a boy in his teens who would have been enthralled with windsurfing and sailing on that cold morning. I remembered when I camped at Burnham-on-Sea in 1950 and took a swim in the cold water of the River Brue at 0630 in the morning to refresh myself before sailing a ketch-rigged canvas canoe with a mate of mine who still sails at the age of 79. I was sixteen at the time. 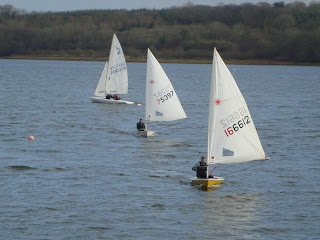 Having succeeded in warming myself and getting back to normal, I followed all the events on the Lake with interest. A pair of Canon binoculars enabled me to get close to the action. From the start it was obvious that the Sills trio were accomplished windsurfers. I noted that my nephew knew his stuff too, and that he could make his Radial Laser perform well. Another Laser fanatic was out on the water and the two of them practised friendly match-racing. I observed how they adjusted their sails and their boards according to how their boats were in relation to the direction of the wind. I also observed how they trimmed them fore and aft to balance them for minimizing weather helm. The objective was always to achieve maximum speed and to seek the superior position for dominating the other sailor. Under those conditions which were non-planing, being able to point higher than the opponent when on the wind, made all the difference. Little could be gained downwind; likewise when reaching there was hardly any difference in speed, except when the windward boat could spoil the air for the leeward one. 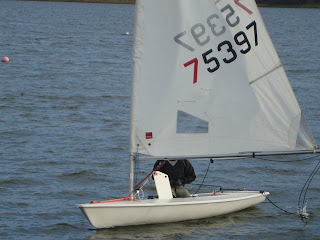 About to land with board up in shallow water


Despite being cold, I enjoyed the outing to Roadford Lake, and I thanked my nephew for his hospitality. If only I had the strength and fitness that was mine when in my teen years I would have been out there on the water too!