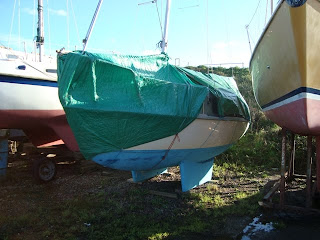 Besides holidaying in Mexico, lots of things have been going on, including attendance at a funeral which entailed a fair amount of travelling on my part. Needless to say, because I’ve been busy, there hasn’t been time or opportunity for checking on ‘Ladybird’. As some of you will know, I sold this little Seawych 19 twin keel yacht to my daughter who will re-commission her in April before launching her at Rice and Cole where she will be put on one of their river Crouch moorings. 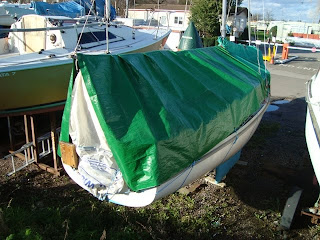 I shall have use of the little boat whenever I like, providing she is not required by my daughter, and there will be opportunities for us to crew together on weekends. Hopefully, by mid summer, I shall also have my new ‘Sharpy’ keelboat for day sailing and camp cruising.


Well, yesterday I had free time, and the weather was perfect; therefore I had a look at ‘Ladybird’ to make sure her winter covers were in place. Despite the very strong winds we have recently had, her tarpaulins were as I had left them - neither had the snow or heavy rain managed to inflict any damage. I checked the boat’s interior to confirm that it remains dry and free of mildew. Before being laid up last October, she was given a thorough clean, inside and out. The addition of disinfectant in the water used for sponging off the interior has undoubtedly helped towards preventing mildew, plus the fact that the boat’s cabin and lockers have been left open for air to circulate. That mitigates condensation inside the boat when the sun heats the exterior.


Very little will need doing to her before being launched, as there are only a few things requiring attention, apart from antifouling. I shall strengthen her drop boards and repaint her rudder before applying two coats of antifouling. Her Honda 3.2 four-stroke outboard will require a service, and I believe my daughter is in the process of making new curtains for her boat.


All in all, by the end of April, she’ll be a smart yacht ready for another season.
Posted by William Serjeant at 4:19 pm