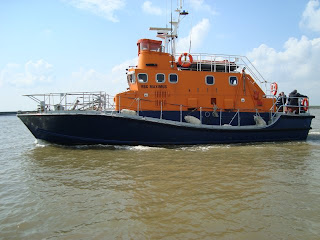 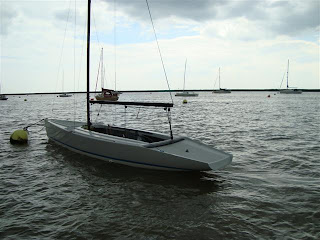 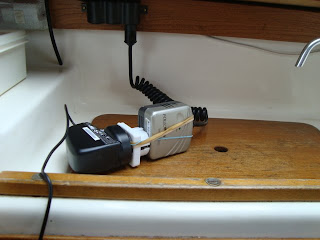 
As I type this, ‘Ladybird‘ is at her mooring. I can hear the chuckling of water running past her hull, and the rustling of nearby sails. A fleet of racing Dragons is beating up the River Crouch against the ebbing tide. Now and again I hear the firing of a cannon when a yacht crosses the finishing line of the Royal Corinthian Yacht Club. RS Elite keelboats swish by, their skippers risking all in shallow water to avoid the current. Further up the River, Squibs with their distinctive tanned sails are in friendly combat, while their crews do their best to outperform the others.

This morning and into the early afternoon I had an enjoyable sail. Firstly I sailed ’Ladybird’ against the incoming tide to a point well beyond the entrance of the River Roach, and after lunch I tacked back up the River. Zigzagging through the Burnham trots I went as far as the Crouch Yacht Club. There, as the wind was very light, I started the engine to help ’Ladybird’ return to her mooring.

Back at the mooring I tidied the yacht, then I set up my small EEE PC laptop to test it, including charging its battery by using a 12 volt inverter that transforms 12 volts into 220 volts. Unfortunately I was unable to connect the laptop to the Internet, because I had foolishly forgotten to take the T-Moble dongle. Later, when I arrived home, I tried uploading my article by using the dongle, but the signal was too weak, which left me with no alternative, except to transfer it to my main computer for posting to my Blog.

The inverter/converter for stepping up the current from 12 volts to 220 volts has the trade name ‘Follow-on’, made in China. I obtained it via Ebay.