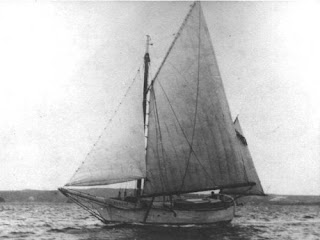 
Joshua Slocum was the first person to sail around the world single-handed. After voyaging 46,000 miles during a period of 3 years, 2 months aboard his yacht, ‘Spray’, he arrived back at Newport, Rhode Island on June 27th 1898. Since then many others have sailed around the world by themselves, and in more recent times, astonishing records have been set for the fastest single-handed non-stop circumnavigation.

Robin Knox-Johnston set a new benchmark in 1969 by completing the first solo non-stop circumnavigation. Out of six entrants who crossed the start line at the beginning of the Sunday Times Golden Globe Race, he was the only competitor to finish after taking 313 days.

In 2005, Ellen MacArthur held the record for sailing around the world non-stop faster than any other person by taking only 71 days aboard the 75 ft trimaran ‘B&Q/Castorama’.

An Australian by the name of Serge Testa still holds the record for sailing around the world in the smallest vessel – she was only 11 foot and 10 inches long, excluding the rudder. He finished his epic 3 year adventure in 1987 by returning to Sydney, via the Panama Canal, and after crossing the Pacific Ocean to Australia.

The current record holder for the youngest to circumnavigate is Mike Perham, an English lad who arrived back in the UK in August of this year. He sailed a 50 foot racing yacht named ‘Totally Money’, with the original intention of doing a non-stop voyage, but due to gear failures he stopped a various places to effect repairs.

At this moment, Jessica Watson, aboard ‘Ella’s Pink Lady’, a classic Sparkman and Stephen’s 34 foot fibreglass yacht, is attempting a non-stop solo circumnavigation; she’s hoping she will be the youngest to do so.

Abby Sunderland, an American 16 year old, has recently acquired an Open 40 ocean racing yacht with a view to beating Jessica to it. She’ll need to get a move on.

The latest attempt to create a new record for the smallest boat to sail around the world non-stop will be made by Alessandro Di Benedetto aboard his modified 6.50 Class ocean racing boat. I believe he has already made a start.

There seems no end of new solo circumnavigation record attempts being made and as technology advances, no doubt old records will be broken and new ones established.