Solo Sailor of the Smallest Boat around Britain? 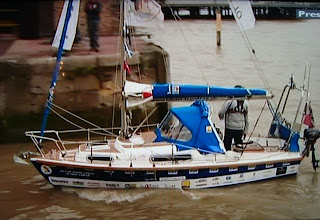 
Who holds the record for sailing alone around Britain in the smallest boat? In this context, I’ll define Britain as the island consisting of England, Wales and Scotland - with tongue in cheek, Cornwall too!


A few solo sailors have been accredited for sailing around Britain in small vessels, for example, Ellen MacArthur and Katie Miller. In fact, both of them circumnavigated England and Wales with their 22’ Corribees. They did not sail north of Scotland; instead they went through the Caledonian Canal. What they did was notable, but they did not sail around Britain. On the other hand, Oliver Rofix recently completed* a circumnavigation of Britain. He did it aboard his Valiant 18’, and I think I’m right in believing he did it alone. Therefore, could he be the record holder for doing it in the smallest boat?


As a matter of curiosity I would like to know who has actually sailed solo around Britain in the smallest boat. I am not talking of non-stop circumnavigations. The chap who came be known as Captain Calamity thought he could do it non-stop in a dinghy, but he came to grief several times. He had to be rescued more than once by RNLI crews, and on one occasion, by the crew of a helicopter.


The relative size of a vessel cannot be based on length alone. Volume is a better indicator. Total girth of a hull at her maximum beam, excluding cabin structures above deck, divided into the length of a vessel might provide a ratio that gives a better understanding of a vessel’s size. A boat such as my old Paradox that is 4.2 metres long, 1.23 metres wide, with side panels measuring 0.688 metres from top to bottom has a ratio of 1.09. My ‘Sharpy’ is 4.572 metres long, 0.79 metres wide and she has side panels 0.29 metres high, giving her a ratio of 2.12, indicating she is the smaller vessel.


I heard rumour that a guy sailed around Britain on a windsurfer. If that is true, he must surely be the record holder. Then there was a fellow who reputedly did it with his West Wight Potter 15, but as far as I can gather, neither of these rumoured solo circumnavigations of Britain under sail have been established by verifiable facts. Who does hold the solo record for sailing around Britain in the smallest boat?

Clarification of the term, ‘Sailing around Britain’: To qualify for the record, the primary energy source for propelling the vessel must be the wind. Manual propulsion and the occasional use of mechanical engines are acceptable, providing they are primarily used for entering or leaving ports and anchorages.

Matthew 24:6 ‘And you will hear of wars and rumours of wars. See that you are not troubled; for all these things must come to pass, but the end is not yet.’