After a restless night, partly because of river traffic and partly because of noise from the container docks at Felixstowe, I awoke with a slightly heavy head - not a headache - just a feeling that I would need to make an effort to get going. The question was, "What should I do?" Should I return to Mistley, or should I explore the River Orwell? I would decide over a cup of tea.


Because everything was close to hand, I was able to make the brew with very little effort. I listened to the Shipping Forecast and decided it would be best to return to the River Stour. I could spend the day exploring the river and find a place for anchoring overnight.


There was to be a southwest Force 3 to 4. I was certain to find an anchorage in the lee of the south bank, where I would have a quiet night, but as things turned out, nothing of the sort took place. To start with, 'Micro' was well-and-truly stuck in the mud. I had miscalculated the depth when I anchored the previous night. She would be there until at least 0745, by which time the flood would be making, and since there was hardly any wind, I would find it impossible sail into the River Stour, nor would I be able to row there against the tide.


The cloudless morning was absolutely stunning, and there was so much to look at. Consequently, I took my time beforemaking sail. A few yachts were out and about, most of them using their engines. One graceful gaff cutter particularly caught my attention. She looked remarkably like a Morecambe Bay Prawner. I couldn't resist photographing her to preserve the memory. A close look through my binoculars revealed that her name was 'Betty'. 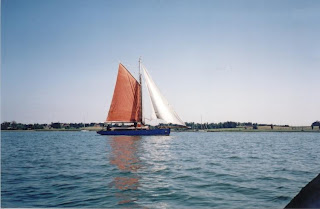 
I finally got the sail up at 1000 and made ready to sail towards Pin Mill. Retrieving the anchor was tedious, because the warp was caked with slimy mud and tenacious weed. I patiently scrubbed both the anchor and the warp with a small brush and placed them in a bucket under the foredeck. 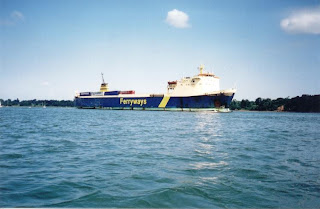 
As I sailed northwards, a freighter approached from the opposite direction. The throb of her engine, the thrashing of her propeller, and her bow wave, ensured that I steered well clear of her. I took out my camera to capture her details for perusal at a later date.


The sail to windward with the tide helping me along the way was really enjoyable, especially when the wind picked up, so that I could sit on the side deck and lean back with my toes tucked under the coaming. 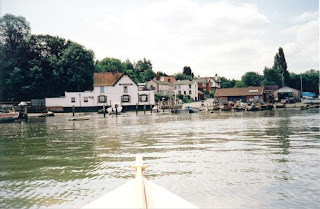 
On arriving at Pin Mill about 11.15 I lowered the sails before entering the moorings which were tightly packed with yachts. From there I rowed towards a jetty near a couple of dilapidated Thames barges and various rotting hulks drawn up on the beach.


The wooded river bank made a lee, where I tied ‘Micro’ to a mooring. The Butt and Oyster pub was a stone’s throw away. The peace was sublime, until some shirtless, macho guy, dressed in waders, tried reversing his partially floating cruiser off her road trailer by revving up a powerful outboard. There was no way she going to move until high water. This bloke didn’t realise that no matter how hard he ran the engine his boat would not budge until the water would lift the boat off the trailer.


Despite the broken peace, I remained where I was, and ate an early lunch. While munching salad sandwiches, chewing a banana and consuming a chocolate bar, I observed the comings and goings of others who were out on the water. One yachtsman rowed a very tiny canvas and wooden tender that barely kept him afloat. It had a transom bow, the top of which was only an inch above the water. I could envisage a disaster waiting to happen.


High water at Harwich was at 1254 and half-an-hour before that time, the water was about slack. I made sail in the hope of exploring more of the River Orwell, but the wind almost petered out, so that I could not proceed. I retraced my track and drifted down river on the ebb. 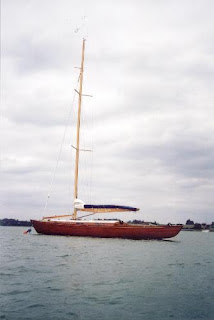 
When cruising I'm often on the look-out for interesting yachts - those which are a bit different, including classic boats. Elegant vessels designed by Herreshoft, Linton Hope or Albert Strange are the sort that appeal to me. Ordinary, white plastic tubs that fill the trots do not in the least interest me.


A mile or so downstream from Pin Mill I came across a wooden classic - a splendid tumlaren that stole my heart - not that I coveted her - but she captivated me by her beauty. Hand-built, with clean lines and a tall mast, she could rightly hold her head high, in keeping with her name, ‘Madam’. She may have been designed by Knud Reimers who was responsible for drawing the lines of the original, much smaller tumlaren.


That afternoon I experienced a sublime drift down the river beyond Levington Marina to Stone Heaps, where two yachts were anchored close to the shingle bank. They were to the west of number one green buoy, awaiting the flood tide.


At that moment I failed to work out that ‘Micro’ would never be able to buck the ebb from the Stour. I kept thinking of the the early morning forecast which predicted there would be more wind, and that I would need to find a place where I could anchor for the night.


When 'Micro's' keels scraped over the shallows at Shotley Point it suddenly dawned on me that unless I took drastic action, we would be swept seaward beyond Harwich by the remaining ebb.


Very fortunately the wind picked up so that 'Micro' could claw her way over Shotley Sands. Yet again the wind petered out, forcing me to anchor. Just when I wanted the Bruce to hold, it didn’t, but the wind gave me a reprieve until I had to anchor for a second time. After I lowered the sails, I realized that the boat was slap in the middle of the fairway! Good Fortune sprang to the rescue by providing a temporary draught of air so that I could raise the anchor and sail towards the western bank, where I finally anchored well away from the fairway.


I let out the entire rope, ate a Mars Bar, and took a welcome four hour siesta. Now and again I checked that the anchor was holding. After my rest I saw a large vessel entering the Orwell. She was the 'Balmoral', a smartly painted pleasure steamer with a white superstructure and a black hull. In a stately manner she made her way into the river. As she passed by, many excited passengers lined her decks. They pointed towards ‘Micro’ and waved. Within minutes she was lost from view beyond a bend in the river.


At Felixstowe Quay, a huge bulk-carrier, named the 'Hajan', was being off-loaded by a gargantuan mobile hoist that made an unearthly racket every time its grabs engaged containers. Afterwards there would be loud rumblings when the containers trundled along a gantry to transporters for storage or dispatch.


By 1830 the ebb was all but finished; therefore I hoisted sail so that I could search for a secure anchorage for the night. I chose one slightly to the north of the anchorage shown on the chart. It was well to the west of number one starboard buoy. There I had a peaceful evening, because the 'Hajan' had put to sea and no other vessel had taken her place.
Posted by William Serjeant at 10:14 pm