Life is full of opportunities, but do we regret not taking them? In retrospect, we may not forgive ourselves for chances lost. Such moments through indecision, procrastination, malaise, etc., may later be regretted.


Being an opportunist, and realising 'Micro' may not belong to me by the end of the year, because she had been advertised for sale, I wanted to snatch a few days away sailing her. I felt I had yet to fully explore her potential.


Obligingly, a high pressure system centred itself over south-eastern England.


This was a chance I could not afford to miss. 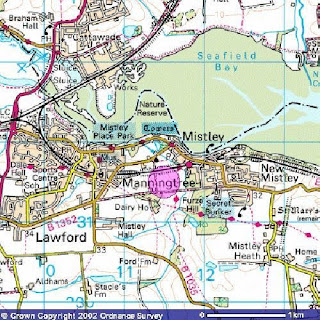 This map is published by kind permission of Ordnance Survey


Having thoroughly prepared the boat for a three day cruise, I set off at 09.00 on Monday, 24th June. My destination was Mistley, a quaint little village near Manningtree, situated at the head of the Stour Estuary. In John Constable’s time Thames barges would have frequented the quay. It was the sort of rural scene the celebrated English landscape artist loved to paint.


In the glove pocket of my car I kept a useful little book, 'Where to Launch Around the Coast', compiled by Diana van der Klugt. From it I discovered that the public slipway was suitable for small craft, but did that mean trailer-sailers?


I took one glance at the slipway, and I knew immediately that it was not suitable for ‘Mircro’, but nearby there was a concrete ramp belonging to the Mistley Sailing Club. Members of the Club said that I would be welcome to use the facility. Unfortunately, my car's exhaust could not clear the apex of the slipway. I overcame the problem by lowering the boat and her trailer down the ramp at the end of a rope that I controlled by taking a turn around the ball-hitch.


I found a double space on the Promenade where I could park the car and the trailer free of charge, but I had failed to bring the trailer lock with me and I hoped no one would take a liking to the trailer. On my way back to the boat, I rehearsed what I would do when out on the water.


So that I could ship the rudder, I pushed ‘Micro’ into thigh-deep water, then I clambered aboard and rowed her to a nearby visitors' mooring. There I ate my lunch and enjoyed the scenery.


Conditions were perfect for sailing. A few clouds cast their welcome, cooling shadows. I plastered suncream on my face, and spread an extra layer on my nose, because no matter how careful I was at protecting it from the sun's rays, after a few hours exposure I would look like a clown with a beetroot for a nose.


My tide book gave the range at Mistley as 3.7 metres, which meant there would be a minimum of 1 metre in most places at high water. Having checked the tide tables a second time, I made sail.


While sitting on my inflatable cushion I leaned back on the coaming and held the tiller between my thumb and index finger. 'Micro's'course was almost due east, towards the bluff at Wrabness, which I judged to be about three miles away.


By mid-afternoon we were a cable to the north of several moored yachts in the vicinity of Wrabness, a feature of which is a number of chalet properties at the water’s edge. Beside a small sandstone cliff, on a narrow pebble beach, these wooden chalets are built upon piles. I couldn’t see a soul, and the place resembled a weird ghost town. I could not prevent myself from having one of those shivers that go down the spine when I intuitively feel there’s something not quite right. I sensed a tragedy had taken place there, and I didn't want anything to do with it. I was pleased to get away. Later, I reasoned that my thoughts had been totally irrational, and I was surprised that I could have reacted in that way.


To my left I observed a splendid stone building which I identified as the Royal Hospital School. Sited at the top of a gently sloping hill it had a wonderful view of the estuary.


Beyond Wrabness, at Copperas Bay, there is a bird sanctuary with drying mud flats. Boats are banned from entering the reserve. Marking its northern boundary there are floating barrages, probably placed there to protect the beach in the event of an accidental oil spillage. As I passed by, I noted that they were being inspected by the crew of a small diesel tug.


The wind veered to the north-west, increasing to a Force 2, and as the afternoon progressed, the few clouds that there were, dissolved, until the sky became totally clear. I marvelled at the wonderful expanse of cobalt blue stretching to the stratosphere high overhead. Broad-reaching, we soon arrived off Parkstone Quay where North Sea ferries dock.


'Micro's' course ran parallel to the northern shore, approximately a cable from it to be well clear of commercial shipping in the fairway. A cruise ship with numerous upper decks was berthed at the Quay, and by the amount of smoke coming from her funnel I supposed she would be leaving port soon – maybe bound for Narvik or the Lofoten Isles. 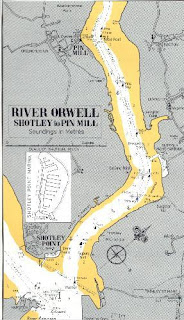 
Low water at Harwich was at 18.00 which meant I had arrived too early at Shotley Point to benefit from the first of the flood into the River Orwell, but that gave me an opportunity for testing my skill at sailing to windward against the last of the ebb. My tactic was not to go too far beyond the shallows of the eastern shore by Shotley, to avoid the stronger current in the middle of the river.


Further into the Orwell, it was a matter of tacking to and fro - first sailing towards the west bank as far as I dared, then into deeper water, but not too far; otherwise the current would sweep ‘Micro’ back. A couple of times I misjudged the depth, so that her keels kissed the mud, but each time I was able to escape.


Several yachts were making over the tide, but most were under power. Each yard gained brought great satisfaction. Every time there was a wind-shift I changed tack to take advantage; now and again ‘Micro’s’ sails were caught aback, with the inevitable loss of ground.


About a quarter of a mile below Levington Marina a grey customs launch overtook ‘Micro’ at speed. She kicked up quite a wash, causing waves to rebound between the banks. I was surprised how long they took to settle.


When we reached a point nearly a quarter of a mile beyond Levington Marina the wind petered out, and I was fortunate to grab a mooring. I prepared the evening meal, and as I was about to eat, a large vessel was proceeding upstream on the first of the flood tide. I had not thought it possible that freighters of that size could make it to Ipswich - especially at low water. Her wash was even greater than that of the customs launch. When the first wave struck 'Micro' I had to juggle my plate to prevent the hot curry from spilling into my lap.


After that onslaught it dawned on me that 'Micro' was tied to a metal buoy. Furthermore, there was a rusty shackle that could wreak havoc to my precious boat. Past experience of bumping and scraping buoys at the turn of tide persuaded me to abandon it. Therefore I rowed to a spot by the river bank and set my Bruce anchor.


Reception for the mobile phone was more than adequate. My wife confirmed that all was well and that she was looking forward to watching highlights of Wimbledon on television. It was my practice to keep the mobile phone in a plastic container, along with my VHF in a similar waterproof container, both of which I attached to the tabernacle. In the event of an irretrievable capsize I believed I would be able get hold of them for contacting the coastguard, first by using my VHF and if that failed I would use my mobile phone.


Around 21.00 I prepared the boat for the night. Orange and purple hues of a beautiful sunset reflected from slightly undulating, muddy water. Terns barracked one another as they vied for territory. A diesel train made its characteristic two-toned note while rumbling along the line between Trimley St. Mary and Ipswich. A handful of seals slithered down the mud into the water.


Before nightfall I cleaned my teeth and I was about to spit the unwanted contents of my mouth overboard, when I noticed a shoal of large jellyfish drifting by. I was reluctant to get rid of the unwanted fluid by ejecting it into the water, but there and then I could not come up with an alternative. I observed that the jellyfish were coated with a film of mud and that they looked to be in a bad way.

(To be continued.)
Posted by William Serjeant at 10:13 pm