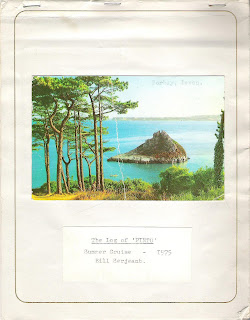 In the summer of 1975 my friend, Geoff, was looking for a crew to accompany him aboard his 21’ JOG Racer for a cruise to Southern Ireland from the Exe Estuary. The yacht was a functional offshore racing machine which could be described as an ULDV, i.e., ultra-lightweight displacement vessel. ‘Pinto’ was a smaller version of the ‘Top Hat’ designed by Illingworth and Primrose.


The following account of our cruise is based on my logbook that I submitted to the Commodore of the Up River Yacht Club as an entry for the Lithgoe Trophy. At the discretion of the Cruising Committee, the Lithgoe Trophy was awarded annually to a member of the Club who presented the most outstanding cruising log. In truth I can’t remember who was awarded the Trophy for 1975, but it is of no importance as I reminisce thirty-five years later.


At mid-afternoon we cast off our Starcross mooring to take the last of the ebb to the Exe Bell Buoy. There was just enough water over the Bar for ‘Pinto’s’ deep fin keel to be clear of the shale and sand. Our trusty Seagull outboard gave us a good 3 knots. When we arrived at the Bell Buoy we set the trailing log to zero and headed southwest for Hope’s Nose which marked the north-eastern end of Torbay. A few hours later we crossed Torbay, and at 2340 Start Point bore 270 degrees while Berry Head bore 310 degrees. There was a gentle offshore breeze and a brilliant moon. 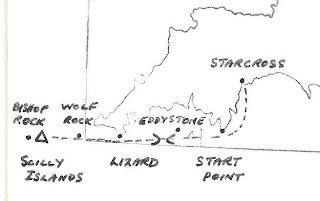 
Tuesday morning saw us having breakfast as we struggled to make way while south of the entrance to Salcombe. The flood tide hampered our progress, so we reluctantly started the engine. With the engine pushing us along we could maintain a steady speed of 2 knots which was perfect for catching mackerel, and within minutes a slippery fish was flipping about in the cockpit making an awful mess before we could put the creature out of its misery by giving it sharp blows to the head with a large screwdriver.

Shortly before lunch the wind veered, so as to come from the east, which was ideal for the spinnaker. We were in the west-going shipping lane; therefore we kept a wary eye open for overtaking vessels. Geoff took the opportunity of the perfect conditions for mending a split in a seam of the Genoa. At 1535 the Eddystone Lighthouse lay about a mile away on a bearing of 330 degrees. ‘Pinto’ was becalmed and the sun was hot, so we took turns at swimming in the cool water. When Geoff climbed aboard after his final swim, a large shark appeared only yards from the boat. I guess it was a harmless basking shark, but his size was off-putting. 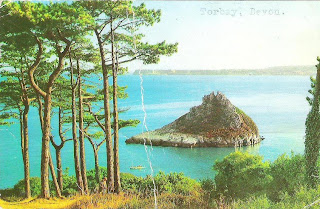 Early that evening the wind sprang up, so that we were able to sail towards Lizard Point. We ran a 3 hour alternating watch system from 1800 to 0600 the following morning, so that each of us did two watches. Whoever worked the first watch between 1800 and 2100 was to swap it for the second watch the following day. We shared watch keeping during daylight, usually helming for two hours at a time, depending on conditions and how we felt. The person off watch prepared, cooked and cleaned away the evening meal. There was very little shipping that night and the stars were gorgeous.
Posted by William Serjeant at 6:43 pm