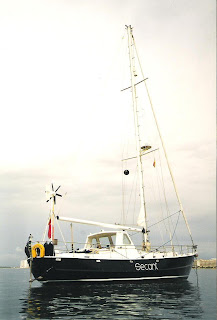 
Aboard the Yacht ‘Secant’ in the Mediterranean, 1998


On Tuesday, 19th May at three in the morning I was bleary-eyed because of lack of sleep. Periodically throughout the night I had been checking the clock. I couldn’t sleep because of being excited about a new adventure. I was to crew for a period of about six weeks aboard the 40 foot Alan Pape steel yacht, ‘Secant’. She was owned by Gordon Blythe, who I had met a few months earlier at the Cruising Association headquarters to discuss the possibility of a Mediterranean cruise. The day had arrived for us to meet again at Luton Airport for the flight to Barcelona, where we would join ship.

Not wanting to disturb my wife, I tip-toed to the bathroom to do the usual ablutions. An hour later, I was standing on the platform of Hockley station listening to the dawn chorus. It was quite chilly and a trifle damp from the morning dew. The rails were making that characteristic humming when a train is about to arrive. I was fully alert as my senses were heightened by the prospect of adventure. My luggage consisted of just a few items: a small rucksack in which there was a camera, a diary, a bible, my passport and an air ticket, plus a canvas bag containing shirts, pants, shorts, jeans, and a swimming costume. I was relaxed and happy.


During the next three hours I travelled on three trains and one bus before arriving at the airport. When I found the Debonair Flight Reception, Gordon was already there attending to his flight arrangements. We agreed to have coffee and croissants before moving to the departure lounge. That was the beginning of our ‘Memorable Cruise'. Much of my sailing has been single-handed, and on those occasions I have been able to do what I wanted without having to consider the wishes of companions, but when there are crewmates it is necessary for all to work as a team with mutual respect. If you do not know their likes and dislikes because of being new acquaintances, you may make a few assumptions.


Our plan was to sail together for up to six weeks, and although there had been no formal agreement to make it a pleasurable experience, I sensed that was our common resolve. In the event, the start of our holiday went well, as we sat drinking coffee. The first few words were important, and within minutes I knew it was going to work. Gordon was not the unsociable person he had made himself out to be at our preliminary meeting, and by the time we had finished our coffee, we discovered we had several things in common – we were both in our sixties and relatively fit for our age; both of us were married, but our wives were not keen on sailing. Our offspring had grown up and were independent, and they were not into sailing. Most significantly, Gordon and I loved yachting and we had been doing it for years.


On our arrival at Barcelona airport we were besieged by a group of enterprising children who used us as guinea pigs to practise and test their knowledge of English. Gordon did nearly all the talking. Being able to make himself understood in Spanish he did the speaking when it came to asking directions and when ordering meals at restaurants. He explained to the taxi driver that we wanted to go to the Marina. There, Gordon showed me around ‘Secant’ and we set about removing the winter's grime by hosing and scrubbing her superstructure.


That evening we walked to the Bombeta to sample the local fare. The Bombeta is a popular restaurant patronized by the locals of Barcelonetta, which is an old part of the city. It was recommended to us by a couple who were living aboard their motor yacht moored in the Marina. To the best of my recollection, their names were Michael and Audry. Michael was the brownest ‘white man I have ever seen. Much of his time was spent on the foredeck relaxing on his sunbed. His companion, whom he was to marry in September, was also a sun worshipper. They came from England via the English Channel, the French canals and the Mediterranean coast until they arrived at Barcelona, where they stopped. They liked it so much, they made it their adopted home. They were particularly attracted to the lifestyle and atmosphere of Barcelonetta.


Not wanting to prepare meals on board we ate at the Bombeta. On the fourth evening of our sojourn we were looking through the menu, and I asked Gordon the meaning of a word. He told me it was lamb. I therefore opted to have that particular dish. You can imagine my surprise when there was nothing on the plate except half a sheep's head! It had been sliced from front to back down the middle. I examined the animal's teeth, his crumpled eye, half of his tongue and what was left of his brain! There was also part of the throat with various bits and pieces.


Having mentioned to Gordon that I liked trying local dishes when cruising foreign, I had no option except to relish what was set before me. The animal’s brain was soft and sweet, and temperature-wise it was tepid. I quite liked the tongue, but l could not bring myself to eat the eye. It looked at me so dolefully through its crinkled cornea. His jaw muscles were a little over-cooked, and the throaty bits were stringy. His teeth were rather unhealthy looking, so I pretended they did not exist. 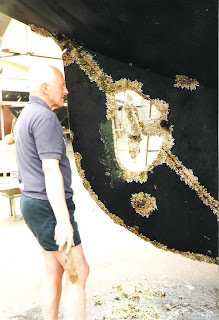 
The day after our arrival, ‘Secant’ was lifted out of the water by hoist. We observed how well the Copperbot antifouling had protected the underwater area of her hull. There were only a few places that needed remedial treatment, but they had not been painted with antifouling in the first place. On the other hand, the propeller was so badly encrusted it had provided no thrust whatsoever. This meant that the yacht had to be towed from her pontoon to the boat hoist. 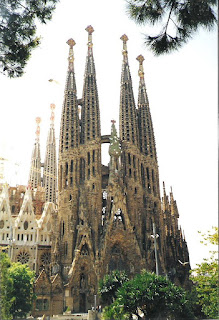 We both worked hard over a period of a week to carry out the maintenance, but Gordon realized I was on holiday; therefore he encouraged me to look around Barcelona. I was fascinated with the Sagrada Familia - the Church of the Sacred Family, designed by Gaudi. I took photos of this edifice which stretched upwards, pointing its honey-combed spires into the sky for over a thousand meters. There was also Mountjuic Fort high upon a rocky mount, which dominated the harbour and city. From the Fort I could see fine views in all directions, and because of its high altitude it was the location for numerous communications aerials.
Posted by William Serjeant at 3:59 pm