Holy Island, otherwise known as Lindisfarne, is steeped in history. The Abbey ruins and the 16th century castle built on the summit of a volcanic mount is testimony to some of it. This latter monument has a commanding position overlooking the Island, and beyond to the Farne Islands - even along the coast northwards to Berwick-upon-Tweed. In the 7th century, Benedictine monks established a Priory on the southern side of the Island. The location was perfect for their monastic lifestyle. There they found peace and solitude on this outcrop which is cut off by the tide twice daily. In these respects, little has changed, except when summer tourists intrigued by the Island's history and beauty invade to pillage and take away their trophies, just as the Danes in their longboats in 793 AD. As of old, today’s visitors must be mindful of the times of high and low water to ensure they are not stranded on the Island. I, on the other hand, could stay for as long as I wished. With 'Micro' as my temporary home, the Island was mine to explore, and my curiosity led to an extraordinary personal experience which I shall later describe.


When I was a young man I had wanted to visit Holy Island, along with canoeing friends. Our aim was to set up a base camp for exploring the Farne Islands. This small basalt archipelago lies six miles to the southeast of Holy Island, and over centuries they have survived the relentless onslaught of North Sea storms. For reasons I fail to remember, we did not make it, but years later I sold my Kingfisher 26 junk-rigged yacht to a gentleman who lived near Peterhead, and part of the deal was to deliver the yacht from Southend-on-Sea to the Scottish fishing port. While on passage I thought I might see them, but they were enveloped in fog. 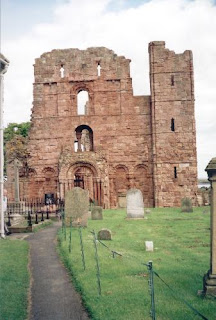 
When I heard that the Dinghy Cruising Association would be holding a rally at Holy Island I decided I would take 'Micro' there - that's if she wasn’t sold beforehand, for she had been advertised for sale. The long-range weather forecast looked reasonable; therefore I set off on Thursday the 30th May 2002, with ‘Micro’ in tow behind my ancient Ford Sierra. We dodged dense and dangerous traffic, and after the milometer recorded that we had travelled a distance of 327 miles we duly arrived at our destination. I tried not to think about the carbon emissions from my car, but I couldn’t entirely feel happy about it.


Heavy showers during our journey resulted in water entering the cockpit, and unknown to me it managed to seep into a compartment under the foredeck where I stored my clothing and sleeping gear. Fortunately, very little penetrated the plastic holdall which contained my sleeping bag and spare clothing. It was a simple matter to spread the wet articles on the car seats for them to dry overnight.


Having arrived at the Island’s causeway shortly before 1600, we had ample time to cross it before the incoming tide would cut us off. High water was at 1900, which was perfect for launching the boat at the fishermen's slipway, but when I came to do it, there was a fairly heavy swell. The only way I could launch ‘Micro’ without jeopardizing the car was to control the descent of the boat and trailer by the use of a piece of rope turned around the tow bar. Had I tried my usual practice of backing the car down the slipway until the rear wheel was at the water’s edge, I feel certain the exhaust pipe would have been flooded. 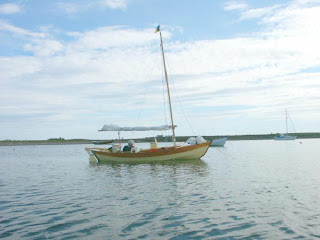 
As 'Micro' entered her element, several American tourists carrying plastic bags and holding cameras were waiting for the ferry to take them to their cruise ship which was anchored offshore. One of them was intrigued with the launching procedure. He offered to hold ‘Micro’s’ painter until her trailer had been parked. When I returned to the slipway he remarked how bitterly cold the wind was, and qualified his observation by drawling that only a Brit would be wearing shorts! I explained that I didn’t mind getting my shorts wet , providing I could keep the rest of my gear dry.


By nightfall 'Micro' was high and dry on a sandy beach and I was snugly ensconced in my sleeping bag as heavy rain and wind attacked the cockpit tent. It was difficult to take in that I had travelled over three hundred miles in one day, and if I had sailed the same distance it would have taken me many, many days.
Posted by William Serjeant at 9:23 pm