A Compass for ‘Sandpiper’

The best compass I’ve ever had for a boat was the Sowester Bosun Grid Compass. A grid compass beats all others for steering a yacht because the helmsman does not have to remember the boat’s heading. He simply keeps an eye on the compass to make sure the north/south needle is central between the sides of the grid. He must also ensure that the north end of needle is pointing to the north end of the grid which is usually identified by a ‘V’ or arrowhead shape. 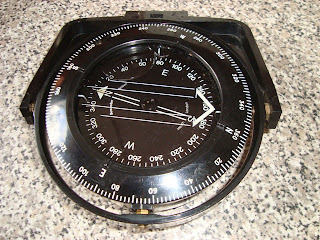 Compass as it is now with a bubble

The rotating 360 degrees bezel is turned until the desired compass course is set by lining it up with the indicator at the forward end of the compass. Allowances should be made for variation, deviation, and tidal vectors. Deviation can be a bind if a yacht is built from iron, when it is best to employ a professional compass adjuster to do the job of setting up the ship's compass. If there is any deviation after the compass has been adjusted he will supply you with a deviation table - even in some instances allowing for the heeling of the yacht.

For the past few days I’ve been keeping a lookout on Ebay for a Bosun compass. Four of them were available. I deliberately bid for one that had a bubble under the glass, knowing that the competition would not be fierce. In all, there were 15 bids, but it went for less than a third of the average winning bids for the other compasses. I was chuffed, and I hope I shall be more pleased when I have eliminated the bubble by adding fluid from an old, unwanted compass.

I like the large size of the Bosun - 104 millimetres diameter across the viewing glass - which helps when steering the yacht, because all the markings are clear. At night the compass does not require a light, as it is illuminated with phosphorous markings. Very conveniently the compass can be attached to a bulkhead by slotting it into a small bracket which has a retainer thumbscrew. The total width of the supporting frame is 195 millimetres. Mine has a second bracket that can be fitted within the cabin where the compass can be securely stowed when not in use.
Posted by William Serjeant at 10:18 pm

Looks like a good buy. When I was a teenager I used to sail in the Irish Sea with an ex-RAF grid compass very similar to yours. Even in these days of sat-nav, radar, chart plotters and digital instruments, not much has really changed. A decent compass, a chart and a 2B pencil will get you where you want to go.

Hi Bill, I bought exactly the same compass for Ciao Bella over the winter. I'm chuffed with it. Easy to see and read. My old boat had a bulkhead compass but if I had anyone on board they would invariably by in the way :~)
My only worry is that It is quite vulnerable when thing get rough and you have clumsy crew onboard.

Precisely that Patrick - a chart, a compass, lead and line, and a wristwatch and you are away sailing!

No worries Phil. I was forever dropping my Bosun compass when I had Paradox on account of being in a confined space. I kept forgetting to firmly attach it by securing the locking screw. Every time I bumped into the compass, down it fell with a thud to the floor. Despite this unfair treatment, the compass never failed.

Hi Bill,
I got here by Googling 'grid compass'. That was also the first compass I ever had and agree absolutely, you just need to keep the lines parallel and you are on the right track. It is much easier for the novice helmsman than trying to steer the lubber line around the stationary ball-the nautical equivalent of the double negative. They were also really good in the early aeroplanes, much better than setting the gyro D.I. to the magnetic compass then having to correct it every twenty minutes. But where do you get one nowadays? I have tried Google,Amazon etc. OK we have GPS etc. but some of us still like the old ways.
Richard Davis